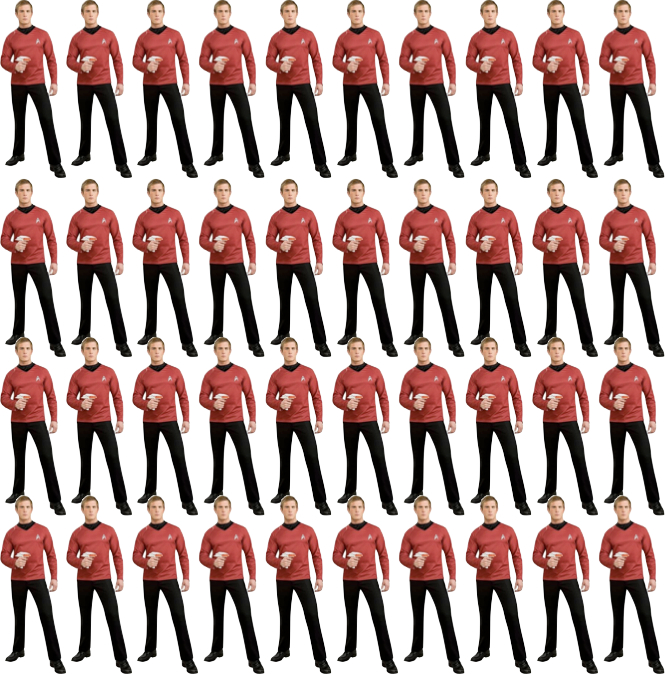 Okay, I know there are a lot of different explanations about how to describe these common components of networks (see, for instance, here, here, here, here, and here), but every once in a while I get a question about whether or not 40G will make things go “faster” in networks (often relating to FCoE and storage in general). Why write another one? I wanted to see how fast I could make this easy to understand.

Last night as I was trying to wind down to go to sleep, I had a brainstorm about an interesting visual (to me, at least) that might help explain some of the different concepts in moving data around. Your mileage may vary.

Let us suppose you are the transporter engineer for the USS Enterprise on Star Trek. The Enterprise has been sent to rescue a bunch of red shirts that have been left on a planet that is about to explode.

Save us! Save us!

Now, it takes time to dematerialize a Red Shirt dude (who will promptly change his tunic as soon as he’s on board, now that he’s safe), send him through hyperspace, and then re-materialize him onto the transporter pad, and then prepare for the next Red Shirt. In networking terms, the time it takes to do this is analogous to latency. Let’s suppose for our example this takes one second.

Now, if you have a whole bunch of red shirts that need to come across that transporter and you can only bring them on one at a time (e.g., 1 red shirt per second, or 1 RSps), it’s going to take a long time. I mean, you have physics as well as the equipment limitations to deal with.

One at a time, please.

Now, if we increase the capability of your transporter pad so that you can do more than one at a time, from 1 Red Shirt to 10, we do this by increasing the amount of data that can be sent at the same time. In other words, you have now increased the total amount of bandwidth, because now we have more room on the stream for Red Shirts.

I can haz moar pads?

Now, keep in mind that we haven’t made the transporter faster, but we have increased the throughput. In other words, for the same amount of time (latency) it takes to send one Red Shirt we can now send 10 RSps.

So, continuing with our analogy, let us suppose that we make improvements to our transporter room so that we have not one pad, not ten pads, but now we have 40.

Again, we still have to cope with the time it takes to dematerialize, transmit, rematerialize, and prepare for each Red Shirt. We can’t cut corners here, because we don’t want to lose anyone. But now our total throughput is 40 RSps,

Obviously, the time it takes to get the same number of crewmen aboard is less, so in comparison it’s faster as we have more throughput overall so it takes less time to clear everyone off the planet. Do we have more data? Yes. Is it faster? No. Is it better? I suppose it’s best to ask the guys wearing blue shirts right now…

Hope this helps someone. Somewhere. Maybe on a planet near you, and especially if you have a fondness for red shirts.