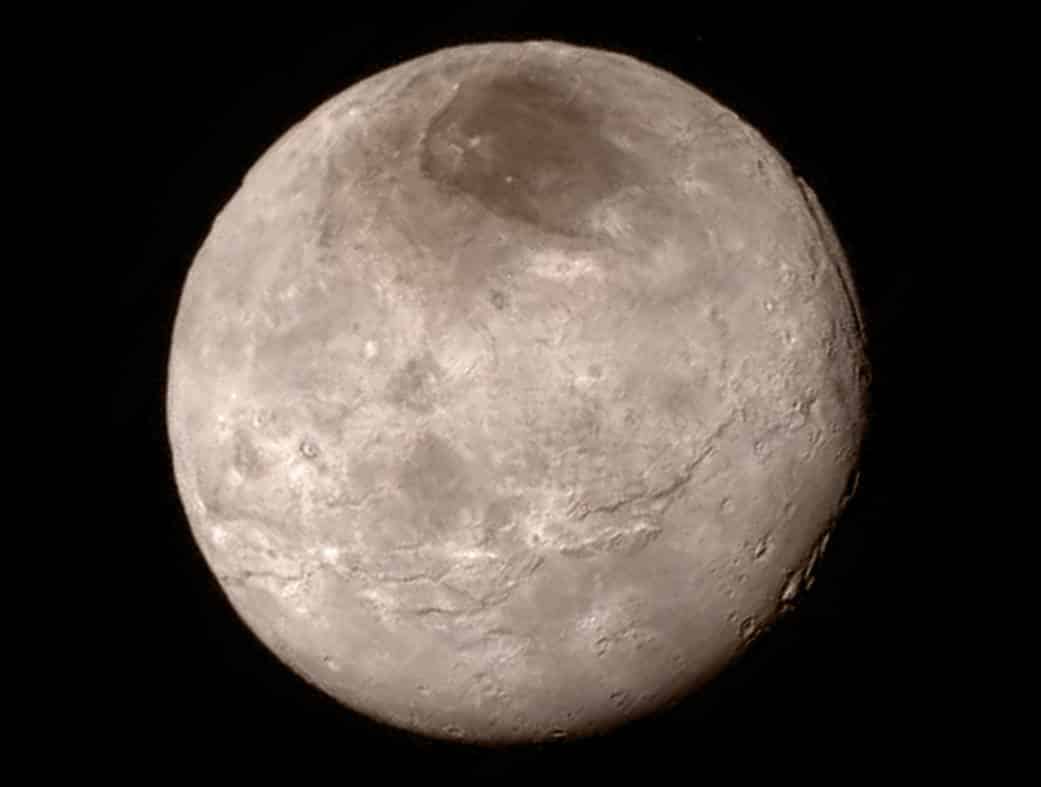 I want to call your attention to a significant event in our solar system: for the first time in history a spacecraft called New Horizons will pass by the Double Dwarf Planet pair Pluto and Charon.

Since the discovery of Pluto in 1930, this image was about as good as we were able to see of Pluto:

Even in the largest telescopes, we knew Pluto as just a little dot on the edge of our solar system .. sometimes with a helpful arrow added.  🙂

Those of you who have been with me at the Fremont Peak Observatory: in that large 0.8 meter telescope Pluto is a difficult to distinguish faint source of reflected light from the Sun.

We won’t know if this all works until about 2015 July 15 at 18:02 PDT (21:02 EDT) when the New Horizons spacecraft will “phone home” to let us know it survived the flyby.
The high resolution images it took during the flyby will start to download in the days and weeks that follow.

New Horizons is the fastest spacecraft that left Earth.  It is speeding away from the Sun at nearly 14.53 km/second (32480 MPH).  Even so it took it nearly 9.5 years to reach Pluto/Charon!

A round trip ping takes light over 8 hours 50 minutes to get there and back:

Imagine a ping/pong round trip time of more than 31830 seconds!

That is why the New Horizons has to fly on auto pilot.  We cannot drive it because by the time our commands reach it, it will already be past Pluto or worse, hit something.
At its great speed, if it hits something as small as a grain of sand, the spacecraft could be destroyed.

While New Horizons is approaching Pluto/Charon, its many scientific instruments will be concentrating on this double dwarf planet system:

This is the best images of Pluto that we received before the New Horizons began its final run towards Pluto:

Best images of Pluto before now

This is the best images we have received of dwarf planet Charon:

The flyby images, if we receive them, will be MUCH MUCH BETTER!!

You are encouraged to follow the mission and You can also download an application simulating the state of the mission. (just click on the “Eyes on Pluto” in the lower left corner)

For more information on this amazing mission, see:

On a personal note:

When I was an elected official in Public Office, I worked very hard to secure the funding for this NASA mission.  Each time I met with members of Congress on behalf of Sunnyvale, I also dropped in a note asking for their support of New Horizons.

Once when the mission was cancelled I found the last missing committee vote to restore the funding of this mission.

As part of my support, my name, the names of my family members and a few friends were added onboard the New Horizons spacecraft.  Yes, there will be a “chongo was here” flying past Pluto / Charon soon!

p.s. Many planetary astronomers refer to Pluto as a Dwarf Planet.  And while a few members of the IAU differ, we regard Dwarf as an adjective modifying the noun Planet.  Yes, Pluto IS a PLANET!

And while some may feel that being called a dwarf planet is somehow a “demotion”, many planetary scientists do not.  In fact our models show that dwarf planets are the most common type of rocket planet.  Rocky planets like Venus and Earth are simply bigger than average size.

The American Astronomical Society’s Planetary Division members, in an overwhelming vote, stated that dwarf planets are planets.  Given our estimate that there are in excess of 100 dwarf planets in our solar system, we live in a wonderfully large planet family that is orbiting our Sun.

After many many years of funding the mission, watching it build, watching it launch, waiting for it to arrive, we now have detailed science data from the double dwarf planets Pluto & Charon!

Images and data will be downloading over the next few weeks.  Moreover there are 3 phases of Pluto departure experiments planned through January 2016.

[Ed. Note. The following is one of the first photos to come back from the mission since Landon wrote this article]

Pluto has its own ion trail:

Pluto has an ion trail

It’s difficult to tell how tall mountains are, when they’re inside craters, and there is no such thing as “sea level”:

Mountains inside of craters

In this case you are seeing them along their axis, Charon out in front. distance to Pluto 19571 km – distance to point of orbit 17536 km: