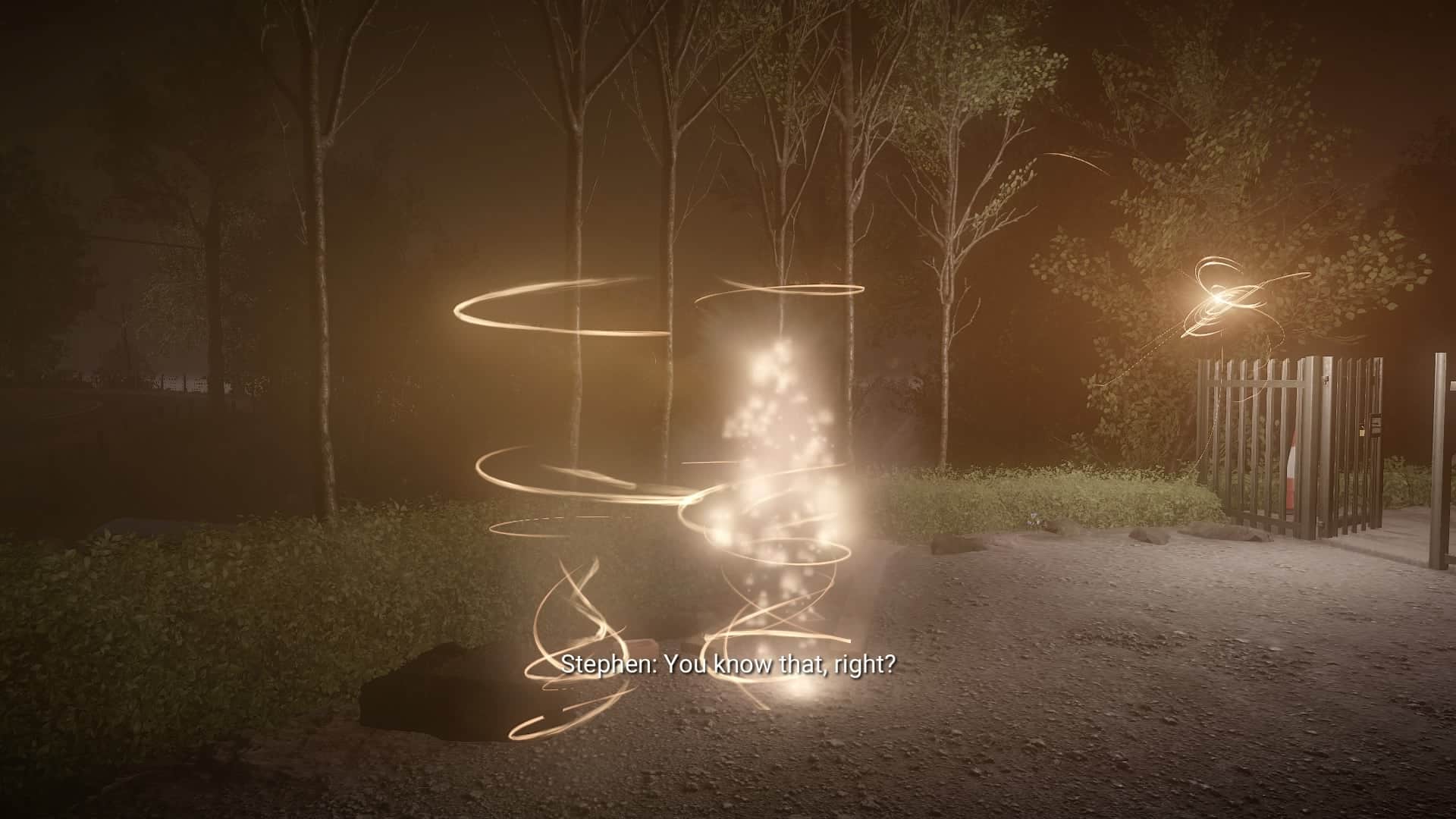 I just finished Everbody’s Gone To The Rapture, a gorgeous, non-linear mystery storytelling tour-de-force, that is not without some minor problems.

Review: 2 out of 10. Recommend if you’re in the right frame of mind for a snail’s-pace non-linear story, but if you’re looking for something other than a sci-fi walking simulator, you’ll be disappointed.

Note: There are no spoilers in this review.

Publisher The Chinese Room took some very interesting decisions when making Everybody’s Gone To The Rapture, but not all of them hit paydirt.

The story is that you, the “player” (I’ll get to why that is in quotes later), appear in front of a gated observatory, looking over the valley of a northern English village in late afternoon. Or morning. Or early evening. Quite frankly, you never really know for sure.

It’s quiet. Too quiet. Much too quiet, except for this strange voice repeating numbers somewhere behind you. Entering into a service shed, you notice a radio broadcasting these strange numbers, and a prompt to hit “X” begins a message that tells you that “the answers are in the light.”

Thus begins the endless wandering around aimlessly in the village of Yaughton (pronounced YAW-ton) in Shropshire, searching for clues as to where everyone went. Along the way you’ll find recordings, broadcasts, and telephone conversations that provide exposition (much the same way Bioshock does), as well as encountering golden ghostly apparitions along the way where you can eavesdrop on a few seconds of conversation.

Over time, if you’ve done enough exploring, the soap opera of English parochial life and scientific (um…) metaphysics will clue you in to what happened. Hint: the title is only partly true.

This is an amazingly beautiful and detailed game. The Chinese Room did a fantastic job of creating ambiance, emotion, and phenomenological texture in the content. Having actually lived in a place that closely resembled Yaughton, I confess to feeling a bit wistful about the somewhat too-accurate English countryside.

I think I’ve eaten here before

The best part about EGTTR, though, is the music. I’m not really a fan of choral music, but Jessica Curry’s beautiful composition was simply entrancing. It helped keep pace with the lethargic cadence of the game (see below) and provided consistency throughout. In short, the music choice for this genre was a masterstroke.

You’ll notice that at no point in time did I call this a game. That’s because there is nothing in EGTTR that can qualify as gameplay.

In short, the ‘player’ (if you can call one that), has absolutely no agency in the game. This can’t even really be called an “interactive story,” because there aren’t any ‘interactions’ that happen outside of the very limited set that I mentioned: (radios, telephones, and ghosts).

What this means, though, is that the entire experience is merely moving from clue to clue. Because of the fact that there is nothing else in the story (I still can’t call it a “game”), you eventually draw tired of the plodding pace at which you walk, and just wish you could get to the clues.

This is not to say that there couldn’t have been game elements here. Each radio broadcast is preceded by a series of numbers. The creative team could have made the numbers mean something, but they didn’t. There were no safes to unlock with the numbers, no scientific “findings” that would have naturally tied in to them, nothing.

In fact, with all the attention to detail they put into the scenery, you’d have thought that something would be relevant outside of pure aesthetics. This simply was not the case, though, and as a result the most challenging aspect in the experience is trying to figure out who is who.

That wasn’t as easy to do as you might think. Many of the characters sound an awful lot alike. In fact, the only character who is instantly recognizable is Kate, the American scientist wife who is also the voice on the radios. The other, English voice actors all sound so similar that it’s almost impossible to understand (and remember) who was talking with whom, and when.

It’s only when you put on the subtitles that you can actually have a chance to build an arc among the characters, and even find out that new characters are being introduced.

When they are introduced, many of the conversations appear completely superfluous and repetitious. Many of them are trying to leave the village, which has been put into quarantine, so their motivations are all the same – until one sentence of dialogue differentiates them from every other person trying to get out of the village.

You would think that The Chinese Room would have made these story clues more rewarding. You’ll need as many of them as you can hope to get, too, if you have any chance of understanding the myriad of relationships that pop onto your screen – sometimes without warning – for 7 – 10 seconds at a time.

Instead, any of the “important bits” are irretrievable, and God help you if you get distracted while any of these rare conversations are going on. The radios are the only thing that can be replayed, which is practically a travesty because they are unquestionably the most useful clues in the entire story.

Radios. Easiest to find, most useless of clues

The biggest issue with the game is the pacing. No, I mean that literally – the pace at which you walk through the village varies from slug-like to slow. It turns out that this was due to a last-minute design change during play-testing where they took out an auto-acceleration that would have made backtracking (which you do a lot) more palatable.

Instead, beta-testers wanted to control the acceleration manually, so they added in the R2 button (PS4) which, after 2 seconds, gradually ramped up the pace of the walking. If you’re trying out buttons, however, as I did, the likelihood of waiting 2 seconds per button was pretty slim. Once one button doesn’t work, and the next button doesn’t work… well, you get the idea.

The ugliest part of all, though, is that you don’t actually have to buy (or ‘play’) this story. There are full walkthroughs on YouTube, as well as an excellent “cut-scene only” video that will take you to every clue in the game without commentary. As this is not a game, but a story, you can watch the entire story unfold without needing to wander at all.

The Chinese Room’s Everybody’s Gone To The Rapture is, without question, one of the most gorgeous software programs to grace my PS4 (nope, still can’t call it a ‘game’). The atmosphere and environment is as immersive and believable as anything I’ve ever seen, and a true pleasure to experience for a while. The soundtrack is fantastic, hauntingly beautiful, and well worth a listen.

But as a game it fails miserably, and TCR’s missed opportunities and difficult story arcs cannot compensate. The clunky UI walking mechanic – arguably the most important, constant action the user takes – is a colossal failure and horrifically mangles the overall experience.

You can watch one of the many playthroughs on YouTube (they run about 3 hours – I recommend the ones with subtitles and without player commentary), or just watch the cut-scene one I linked to above, and save yourself $20.

3 out of 10 (bump for the music and gorgeous graphics)