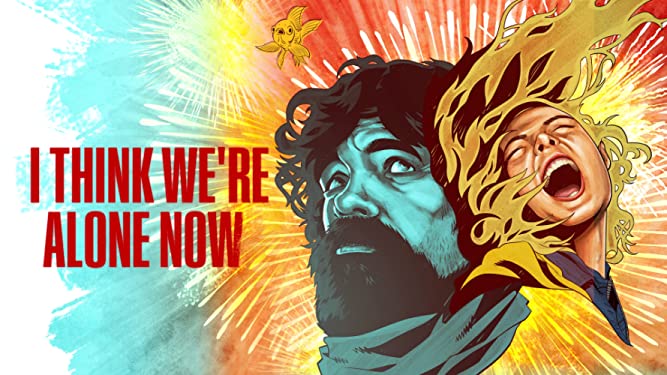 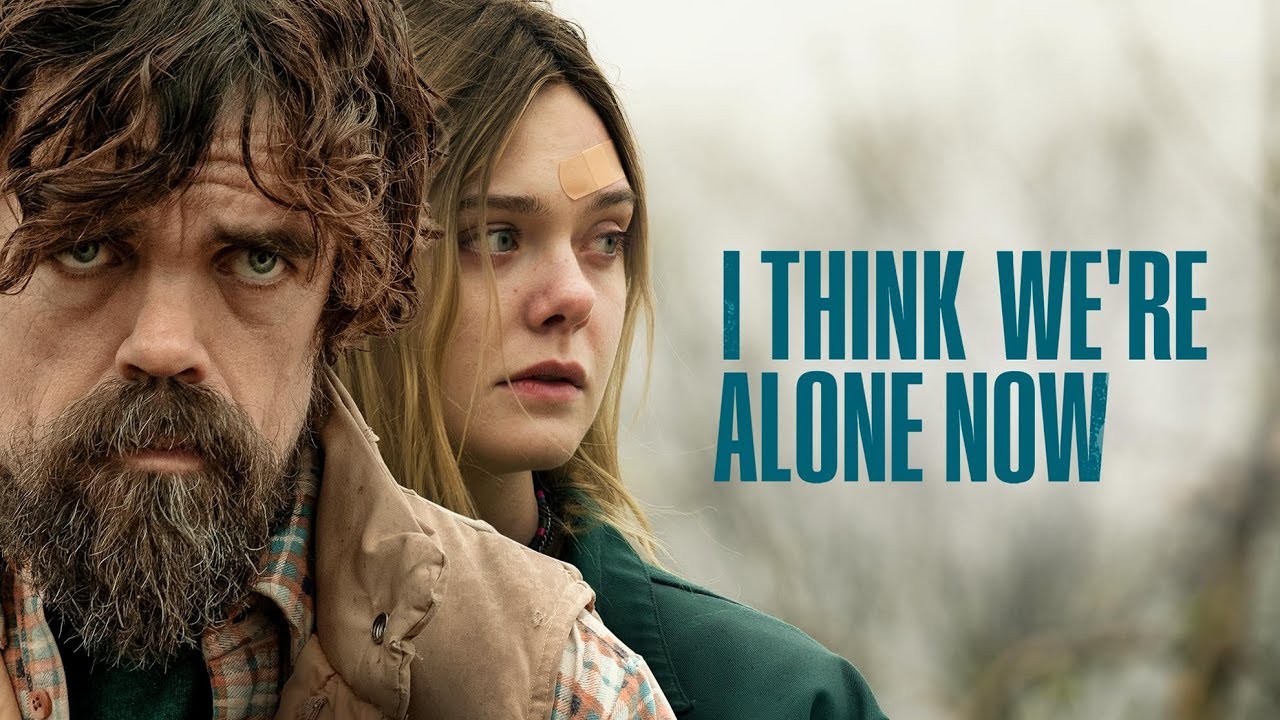 I Think We're Alone Now isn't a bad movie, per se. It has its moments of great potential, so perhaps its greatest sin is that it never has the bravery to tackle some of the subject matter it brings up. Slow and plodding (as opposed to methodical, which would have been forgivable), the movie wastes brilliant actors and a strong indie premise. 5/10.

Read on for more. No spoilers until the end. 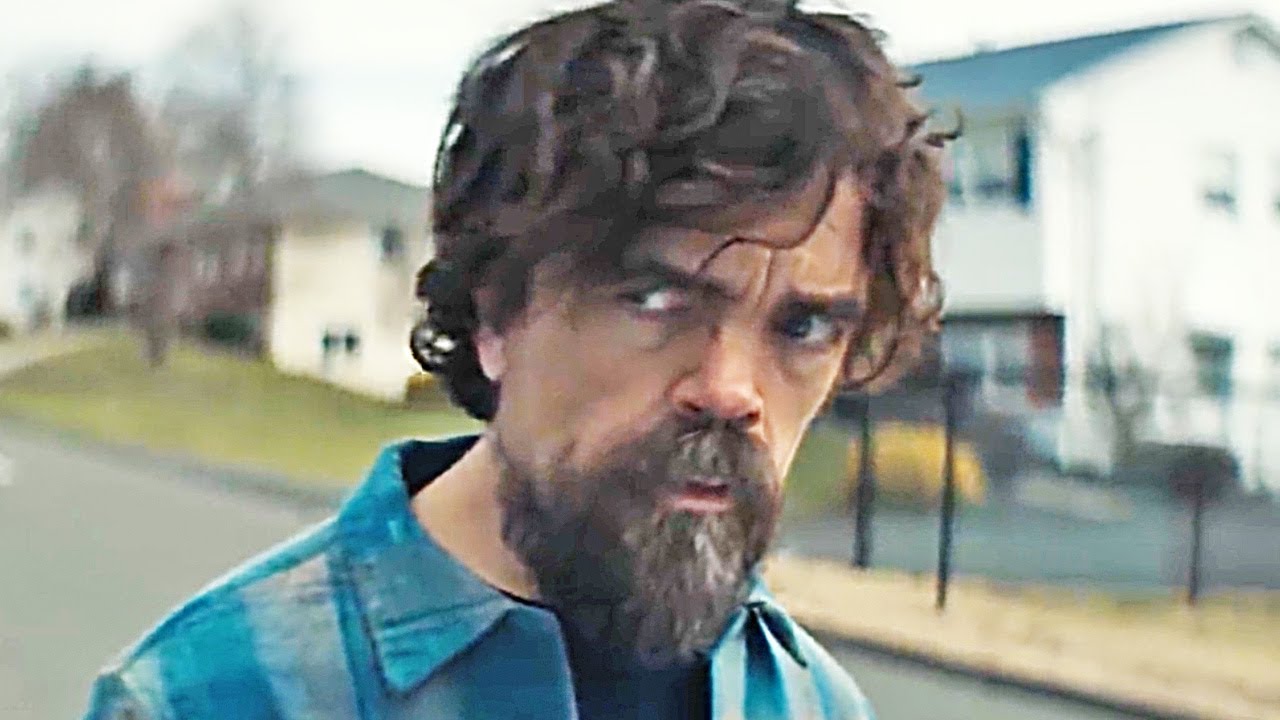 I Think We're Alone Now is a post-armageddon science-fiction movie (though "science-fiction" is misleading as the only elements that qualify are shoehorned in at the very end of the movie).

It stars Peter Dinklage as Del, a loner who is the sole survivor of an apocalyptic disaster that saw the sudden death of every other person he knows. At least, he thinks he's the sole survivor until Elle Fanning's Grace crashes (somewhat literally) into his life and turns it upside down for a second time.

Elle's character, Grace, is far more of a free spirit than Dinklage's morose Del, and little by little she brings him out of his hermit-like existence. Together they work to clean the town (literally) and bury the dead. After all, there's not much else to do without electricity, jobs, or a pre-defined purpose in life.

Del and Grace's chemistry is awkward at best, which in this case works for both the characters and the tension caused by the plot. Both of them are seriously emotionally damaged people - after all, who wouldn't be in such a circumstance? - and it provides an underlying conflict as Del would much rather be left alone in the first place. 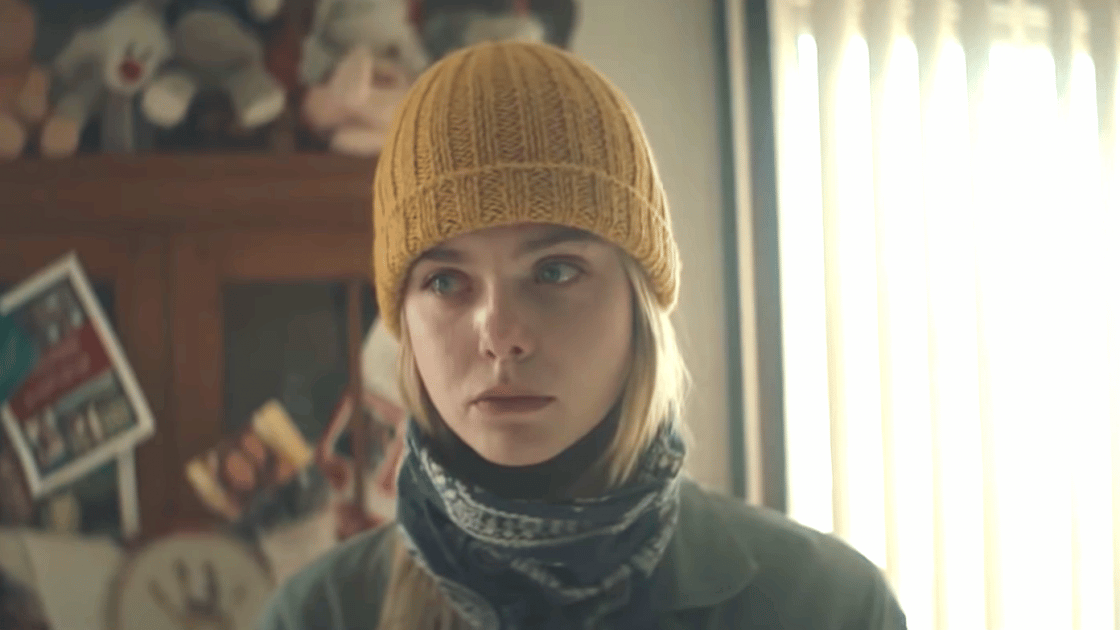 Grace has a secret, though, teased at periodic moments throughout the film. A strange scar on the back of her neck belies a past that she isn't willing to share with Del.

For his part, Del has his own secrets. An extremely methodical man, Armageddon has given him a chance to control his life in ways that he wasn't able beforehand. Grace's presence - and curiosity about him - upsets that. As a result, he struggles with striking a balance between the need for controlling the entropy in his life and his emerging need for her companionship.

Together, Del and Grace begin to find a rhythm. She begins to learn more about Del's past and the reasons why he enjoys his solitude, and starts to be more understanding and considerate in her behavior.

Del, for his part, starts to see himself as less of an outsider. Before the apocalypse, he was of this world but not a part of it. That remained after Armageddon and, in fact, reinforced his state of being. He could keep himself separated from the horror around him, stay above it. Grace's constant presence forces him to start engaging as a participant in his life rather than just a perpetual observer.

Unfortunately for them both, just as they are about to each turn a corner and make breakthroughs, Grace's bizarre past comes crashing down on them both.

All in all, it is not a bad film. It's beautifully shot, and the nuances of character development are some of the best in modern cinema.

Beyond that, though, the film simply cannot make it to the finish line in the race that it started, using the rules that it created for itself.

At 99 minutes, the movie is probably 20 minutes too long. To say that it's a slow movie is an understatement (I actually was surprised that it was only 99 minutes). The movie has probably close to 5 cumulative minutes of dragging dead bodies around the town. It is filled with moments that feel forced to pad the runtime, such as the entire ending (more on this in a moment).

The reason why this is notable is that there are so many opportunities that could have been explored that would have made for engaging cinema and justified the length.

The real surprise here, in fact, is Fanning. She not only holds her own next to Dinklage (and, later on, Paul Giamatti and Charlotte Gainsbourg), but she actually bests him in terms of both range and subtlety.

In the beginning, she comes across as something of a wild child. She listens to rap music, can head-bang to Rush, and even find excuses to inject humor in an otherwise bleak outlook. As time progresses, though, she begins to show depth and complexity that prevents her from simply being a cliché.

Part of the issue, then, is Dinklage himself. Now, the man is a phenomenal actor with significant chops. He has the ability to inject personality - if not outright humor - in dramatic moments. In this movie, though, he finds a single note and hammers on it like a 3-year old reaching the piano keys for the first time. 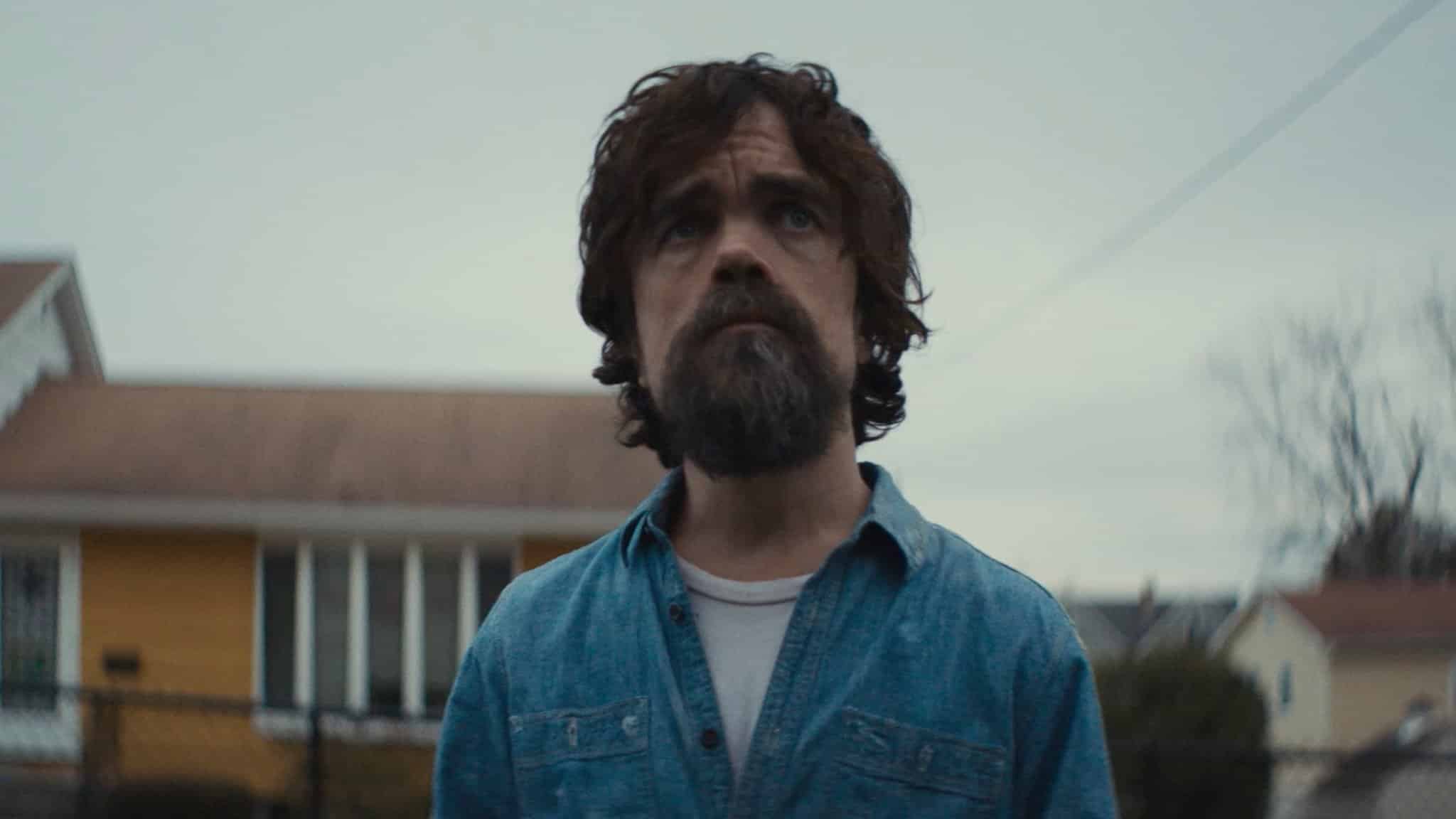 Even when there is cause for Del to show some other emotion, whether it be anger, remorse, or even attraction, Dinklage never delivers.

As you can see from the selected stills, Dinklage almost never deviates from what looks like a perpetual state of shock. He's a misanthrope, and by God he's going to be a misanthrope, dammit! 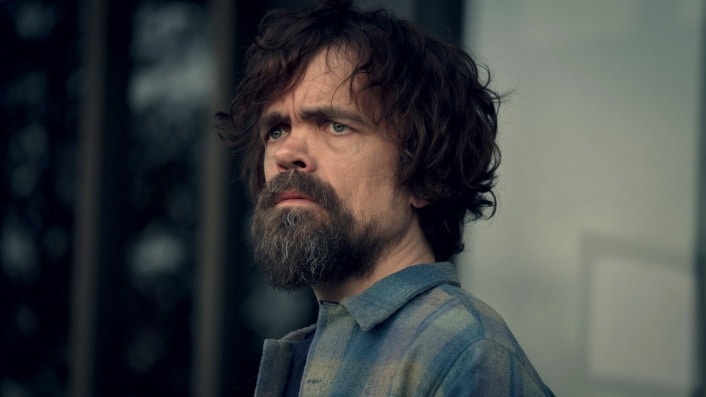 This winds up having the effect of crippling the plot opportunities.

For example, for a short period of time Grace finds a puppy that has grown nearly feral. She "adopts" it, and brings it back to the library where Del has taken sanctuary. Unfortunately the puppy - as puppies are wont to do - destroys one of the precious (to Del) books, and Grace desperately tries to hide the mess from Del.

He finds out anyway, and his reaction is not as she expected. He's more subdued, and offers to take care of the dog while she cleans up the mess. Shocking them both, the dog lunges for Del and winds up biting his hand, requiring makeshift stitches.

The scene that follows is actually quite good. Del is attempting to stitch his own hand but is having issues (as you'd expect). Grace comes in and - surprising both of them - begins to suture his hand.

It's a fantastic scene between the two actors and in just a few moments we can see true growth on the part of both characters. It's a delicate peace, and a wonderful glimpse of how Del and Grace are moving beyond the uneasy detente into something stronger.

Later that night, Del sees the dog tied up to one of the pillars. The next morning, Grace is distraught because she can't find the dog anywhere, and they go out looking for her.

As she starts to question what could have happened (she knew she had tied up the dog), Del confesses that he let the dog out with a lame excuse of "it needed to pee."

It's a horrible betrayal of trust. Del, however, shows no remorse nor acknowledges that what he did was wrong. Grace, for her part, is too stunned to respond, and they walk on in silence as they "try" to find the dog.

And it's never mentioned again.

The dog (known as "Dog") never returns. They never speak of it again. Their relationship continues on as it had before as if they had never found it in the first place.

What a wasted opportunity. The conflict generated by that alone could have been fleshed out as Del comes to grips with how his attitude damaged their relationship, or Grace starts to doubt how reliable Del actually is as someone she can count on.

But that never happens.

It's a shame, too, because it might have just made the hard left turn more bearable in the third act.

Here There Be Spoilers

Turn back now if you don't want to

The most egregious problem of the film comes from the bizarre side-step into The Walking Dead world.

Periodically throughout the film, we've seen that Grace has a mysterious scar on the back of her neck. It looks like pretty major surgery in the past, but it doesn't appear to affect her and it doesn't affect either the plot or the characters at all.

Until suddenly it does.

Without a clear motivation for why she decided to choose the moment, Grace tells Del that there is "something" she has to tell him about her past. Instead, however, she kisses him, and it's heavily implied that they go back to her house and sleep together.

Del wakes up to hear a man's voice from downstairs, and slowly descends to find the ever-wonderful Paul Giamatti and Charlotte Gainsbourg  sitting at the kitchen table.

Giamatti's Patrick is creepy. As in, The Walking Dead Neegan creepy. A jovial politeness that thinly veils an obvious menace, and it's clear that Grace is petrified by his presence.

Patrick and Violet have apparently come all the way from Palm Springs, California, to find their "daughter." It's never explained how - in a world without electricity - they managed to find the exact house - Grace was staying, 2000 miles away.

And then it gets weird.

Del wants to have nothing to do with this, even though something is obviously wrong and Grace is beside herself in fear and grief. She tries to stop him from leaving, fails, and goes back to Palm Springs with Patrick and Violet, but not before Patrick tries to persuade Del to join them in Palm Springs.

Del refuses, and Patrick provides his address should Del change his mind. This comes in handy as Del, of course, does change his mind and decides to take the cross-country trek to find Grace.

Del arrives in Palm Springs after a relatively uneventful trip (because, of course, it's not as if there was an opportunity for plot or character development here).

When he arrives, he finds that Patrick has decided to force Grace into surgery to "remove the sadness, regret, and unhappiness" to build a new kind of humanity.

To be blunt, it feels as if this was the story we should have been watching the whole time, given that it's the climax of the film. As it is, it's as if Mike Makowsky (the writer) suddenly realized as he was finishing up the script that it was supposed to be a science fiction story, and threw this in willy-nilly.

This entire third act simply doesn't make any sense. It doesn't address anything that happened before, doesn't explain their decisions or their behaviors, doesn't even resolve any of the conflict that already occurred. If anything, it starts a whole new film at the tail end of the first one.

At one point, Grace tells Del that she was "assigned" to Patrick and Violet (who, herself was subjected to the same surgical procedure as Grace), and they weren't her real parents. I hope you're satisfied with that tidbit of information, because that's all you're going to get about how that came about.

Grace is 'rescued,' of course (was there any real doubt?), and they manage to escape the Palm Springs where apparently everyone has been subjected to this procedure. The town looks like what would happen if Stephford Wives had Edward Scissorhands' baby.

Bright sunshine, immaculate lawns, primary colors on the residents who have lobotomized looks - it all speaks to a far more dystopian reality than Del and Grace were living in (despite the overly dark hues throughout most of the movie).

All in all, the ending of the movie feels more-than-rushed. For as slow as a pace as the bulk of the movie took, the conclusion simply appears to have been a mad dash to throw in conflict and risk that undoes much of the delicate character work in earlier scenes.