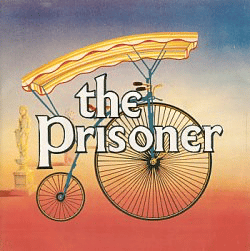 Oh, how the times have changed, and the sensibilities along with them.

Patrick McGoohan, the co-creator, writer, and oft-director of the original “Prisoner” series in 1967, died in January of 2009. All I can say is that I’m glad he doesn’t have to see what’s been done to his beloved series. 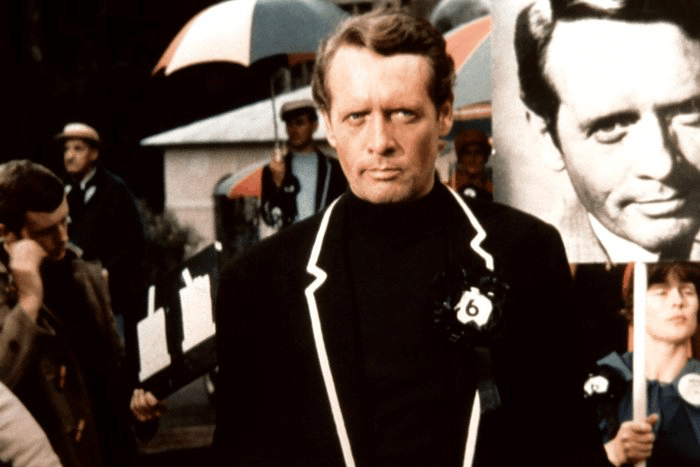 Patrick McGoohan, as No. 6

Surely the producers of the new show wouldn’t be so naive as to expect that comparisons wouldn’t be made, right? I mean, surely! And yet if they understood this, why have they done what they have done?

For those who are unfamiliar with the premise of the show (where have you been, culturally speaking, for the last 40 years!?), a secret agent resigns from service only to be kidnapped and sent to a resort-like prison island where his kidnappers repeatedly attempt to find out why he has resigned. We never find out the prisoner’s name, as he is only referred to (even by himself) as Number 6, nor are his captors named or their affiliation identified.

The reason why The Prisoner has been so popular for all of these years, and still holds up the test of time (though our modern sensibilities might find the pacing of the show slower than what we’re currently used to), is because the central tenets of the spirit of the show touched on basic, core, human conflicts, both within and external to the self.

The Village, the place to where Number 6 is taken, is a beautiful place that is just slightly off-kilter (a real location called Portmeirion in North Wales), where the people are just a bit too polite, too friendly. There is a slight cant to the reality that appears to be about 15 degrees off from normal, enough for Number 6 (and the audience who is trying to understand what is happening) to see an underlying vein of menace and malicious intent.

This is Cold War stuff. Surveillance cameras and ultra-modern gadgets (cordless phones in 1967!), high-tech hypnotic drugs and of course the omnipresent Rover, the giant white ball of death that prevents anyone from escaping by sea. This is government at it’s most fierce, but *which* government? It’s an era where the slightest slip of the tongue means death and slavery to possibly thousands, maybe millions of innocent people.

Number 6’s antagonist is Number 2, the task master chartered with extracting that most secret of secrets – the reasons why he resigned. It is a battle of wills, but also of wits. In that demeanor that is classically and inimitably British, Number 2 attempts various ways of extracting the information, from brute force to brute farce. The surreal nature of the village lends itself to messing with Number 6’s head in ways that wouldn’t normally be possible as every minute of every day he is kept off balance. The cat-and-mouse game and banter between 6 and each Number 2 is one of the most enjoyable aspects of the series. 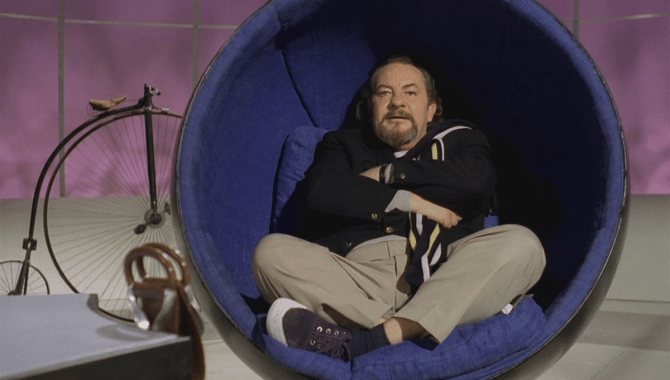 Witness this sample exchange at the beginning of “Free for All”:

Number 6: “That is the number of this place.”

Number 6: “The mountain can come to Mohammed!” (hangs up on Number 2)

A moment later, the front door opens and Number 2 casually walks in.

Number 6 (smoothly, without missing a beat): “Everist, I presume.”

Number 6 (smirks), “Play it according to Hoyle?”

Number 2: “Yours only. Confide, and we concede.”

For his part, Number 6 is the hard-line individualist. He is always in control of himself, or how he allows his captors to perceive him. He refuses to permit them the satisfaction of witnessing a chink in his armor. He is the ultimate example of self-discipline and restraint – until he sees an opportunity and he grasps it. During the exchange with Number 2 – as with all of his exchanges, he refuses to show concern or even surprise when even the most bizarre circumstances arise, as if he were expecting it all along.

Take the exchange above, for instance. The phone conversation takes place through the television, where Number 2 is in his office. When 6 hangs up the phone and turns to return to his kitchen, his front door opens and Number 2 walks in. What this means is that the entire Number 2 exchange was pre-recorded, that he *knew* what Number 6 was going to say and how he was going to act. Number 6 realizes this and yet manages to keep his cool. Later on, in another episode, he uses this information to show another Number 2 that they may not be able to predict him as well as they thought.

For Number 2’s part, he has to answer to Number 1. If 2 should fail at the task at hand, as so many other 2’s had, well, we’re not sure what happens to Number 2 other than it isn’t pleasant, and the consequences are dire.

Jim Caviezel’s Number 6 is anything but smooth, anything but in control. *This* Number 6 is lost, confused, and doesn’t care who knows it. In contrast, Ian McKellen’s Number 2 has no such concern, no one to answer to. The villagers are frightened of *this* Number 2, as he has the ability to determine who lives and dies – quite literally. For instance, from time to time, one character says to Number 6, explosions in the Village happen. The original series’ citizens were myrmidons, prisoners themselves, or double- and even triple-agents. The trick was knowing who was on who’s side.

This is perhaps the biggest flaw of the new series, that the balance of power is so drastically and dramatically altered. The original series placed considerable power in the force of the individual. Number 6 was too important to kill (though there were characters who attempted to do so anyway), and too important to let go. The struggle between individualism and conformity was prevalent through the entire series, and McGoohan’s Number 6 never, *ever* conformed (unless he was drugged or it otherwise served his plan for escape).

The 2009 Prisoner has changed the game considerably. Caviezel, the so-called individualist, is weak, ready to conform, and far too willing to give up information. His only hope at survival is finding chinks in The Village’s armor, at sowing seeds of down among his neighbors. McGoohan’s 6 would never have resigned himself to believing that he was a bus driver and would not have, under any circumstances, allowed himself to believe that – as this new show tries to use as it’s main premise – that the outside world simply does not exist.

Government-as-antagonist is now replaced by Business-as-antagonist. In the very first episode we find out that Caviezel was a mere analyst (more information than we ever found out from McGoohan during the entire series), and that one of his reports to his superiors resulted in his motivation to resign (which was the entire goal of the first series!).

The power dynamic between The Prisoner and Number 2 is radically altered. There is no witty rapport, no banter, no test of wills or strength of character. McKellen’s 2 is a bully, pure and simple, albeit with more deadly wedgies in his arsenal. Caviezel is a wimp, a sniveling weasel whose inclination to fight for his individuality is inconsistent and unbelievable. His captors see this too, and as a result he poses no threat whatsoever.

The cat-and-mouse game is now merely a rat in a maze, a severe disappointment for fans who saw themselves as living vicariously through Number 6. For viewers of the original, we *wanted* to be Number 6, we admired his tenacity and his stubbornness, we wanted to believe that if we were put in the same situation we could have *his* constitution and strength of character.

Not so in this new series. *No one* wants to be Caviezel’s six. The believability of an entire village set in a desert with absolutely *no* knowledge of an outside world stretches credulity beyond its limits (what, no airplanes flying overhead? Ever?), and makes a mockery of the original show’s spirit.

That spirit, that the individual is more powerful than the collective’s force upon him, was central to the significance of the show. The notion that government – any government – could assert a right of imprisonment over the individual without a fight was anathema to its premise, and it showed – for 17 episodes – that no matter how twisted, surreal, or mind-bending the world presented to us became, the power of the individual was a force to be reckoned with.

This new message is shameful, if not just downright appalling. It’s not government that we have to worry about, it’s corporations. Individuals have no power, we are just subjected to the whims of bullies. And if this new, modern Number 6 is our role model, conformity seems like the only rational, logical option. They are bad people, and we are powerless to fight them – to do so just seems futile and we must borrow from someone *else* to regain our control over ourselves. We are not individuals, despite what we claim, we cannot be a force on our own.

In this new series it is a backdrop, a location. It has no message, it has no voice, no personality. 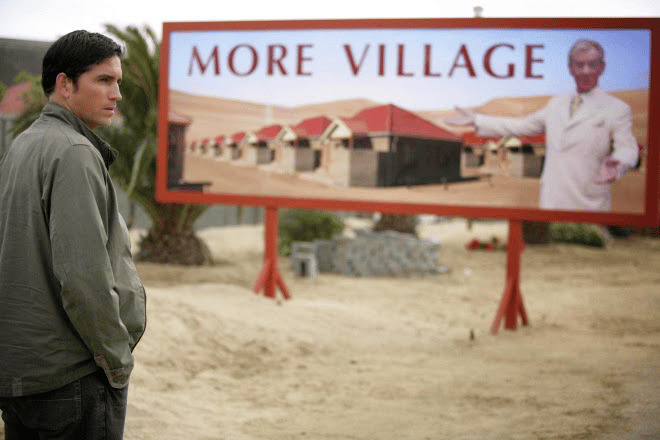 As bland as its desert location

In contrast, in the original the Village was a character, a Stepford village that had a role to play. 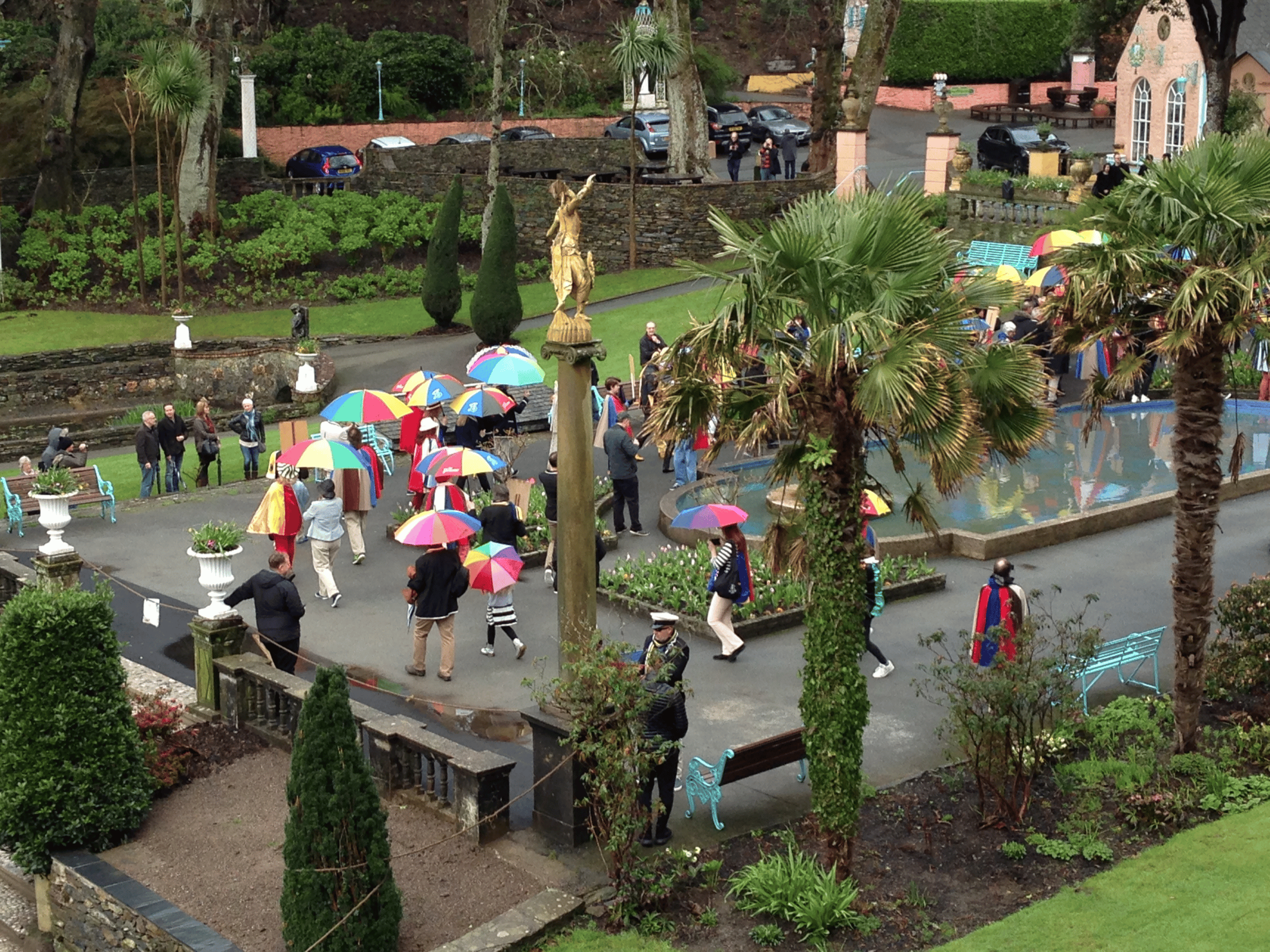 In the original the surrealism carried a message, a message of what people knew about Number 6 and how he could be manipulated. Sure, drugs were applied, but only as a means to convince him of a reality that did not exist. It was the everyday reality of The Village that was the most truly effective tool, because it was so unsettling drugs were generally not necessary – after all, what’s one more unusual thing in a surreal village where nothing is true? 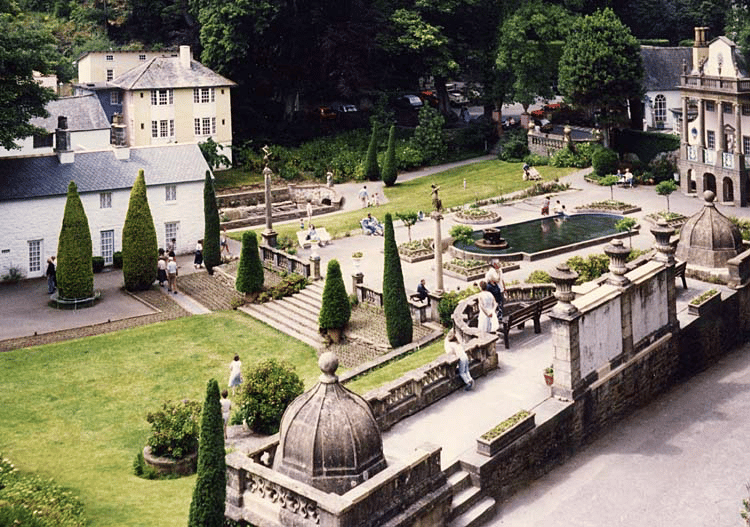 The beauty of the Village underscores its deceptive purpose

There are 3 broadcasts of this series, representing 6 episodes total. My first inclination is to cut my losses and write this off as never having existed. (something like Highlander 2 🙂 I will watch the second broadcast, though, and make my decision afterwards, however. Given what I’ve seen thus far, however, I don’t have high hopes, and this is not the message I wish to have remaining in my mind.

I believe it’s safe to say, however, that there is no way this remake would possibly have the cultural impact of the original. This is too bad, as there were so many opportunities that were missed to update a classic without ruining its spirit.

Read on for Part 2 and see just how bad things can really get.