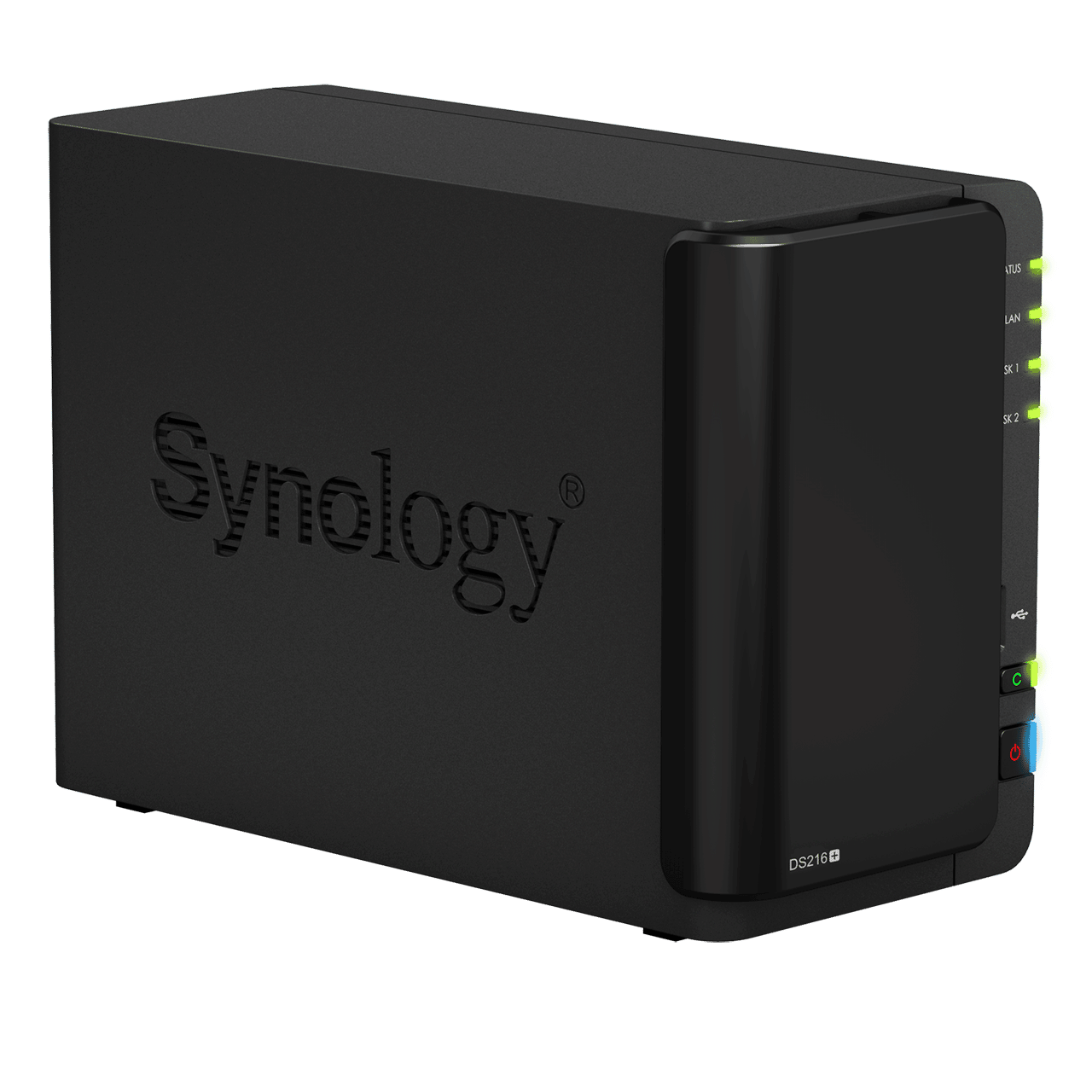 A few weeks ago Synology sent me a DS216+ to review. Unfortunately, I haven’t had a lot of time to give it the thorough examination as I had wished, but I did manage to do a couple of quick tests in a temporary (that is, don’t try this at home or for a long-term solution) configuration.

Overall I found the installation process to be even more simplified than before, and the performance to be quite impressive.

The DS216+ is a high-performance 2-bay NAS server aimed towards home- and small-office users, but the real kicker is the on-the-fly video transcoding.

For the storage geeks out there, Synology uses the Btrfs file system internally, which provides a number of data protection features:

You can still use ext4, ext3, FAT, NTFS, or HFS+ as well for external file system compatibility.

I’ve installed a few DSM versions, but with this model Synology has simplified it even further. Turning the machine on effectively started the DSM installation process, as the box searched for the latest update and began installing it without any user intervention.

Idiot-proof installation (perfect for me!)

Once the software was installed and the machine re-booted, DSM offered me a “recommended installation” screen. This surprised me, but it wasn’t unwelcome.

Even though Synology is bending over backwards to show that there are work-related capabilities of this device, the DS216+ is really a media server at its heart. For grins and giggles, I selected all of the packages, and let it go. Normally I wouldn’t do this, but I wanted to see just what the little box could do.

I also installed Plex on the Diskstation, since that’s the media software that I have been using primarily for most of my home content.

For my test, I chose a home video I created of my friend’s wedding. The file was 3.7 GB, running at 1080p High-Definition quality.

What I was looking for was the typical stuttering and jitter that comes from trying to encode/decode files while simultaneously trying to stream at a good quality. Using the web application for Video Station and Plex, I noticed that there were considerable differences in load times between the two apps (Video Station was nearly instantaneous, but the Plex window always needed at least one reload).

This is not the place to go into a side-by-side comparison of Video Station and Plex (both have significant differences and are worthy of their own post), but rather to see what kind of experience one could expect using either UI to watch content.

These numbers are pretty consistent with what Synology posts in their performance specs, but it’s also worth noting that this is only a single disk setup, and so you should take these numbers with a grain of salt the size as a salt lick.

In case you’re freaking out because the disk test recommends not using the device for high-definition video, don’t. The real magic happens in terms of the encoding built into the hardware, and that’s not something measured in the Black Magic test. The real measurement is whether or not the DS216+ can encode and push out a 3.7GB file over a wireless connection to my home theatre system.

The bottom line is that the DS216+ performed like a dream. The same wedding video file that choked both the DS1511+ and the DS1813+ (the latter performs much better than the former, of course, but still hung up on buffering about 20 minutes into the video) ran flawlessly in both Video Station and Plex software interfaces. There wasn’t one bit of jitter or buffering, but this was a quick-and-dirty test and I didn’t wade through the entire 1 hour video to double-check.

When I go through with some more thorough testing (and tune the box for video and audio streaming delivery) I’ll come back with more accurate numbers. For now, though, I was impressed with just how easy it was to set up and configure for mere mortal users, and how reliable the content delivery was (the software UI, however, needs some work, but as I said that’s best left for another time).

The Synology DS216+ is available on Amazon for $299.99 and the drive(s) that I use in the Synology are the Enterprise-Class HDDs. Currently the DS216+ has a single 3TB capacity drive, but I’m going to up the dosage to 4TB as it’s going to be a pure media server including audio and photos. This is especially true as the 4TB is actually $3 cheaper than the 3TB (as of this writing)!

Overall, for someone looking to for a simple media server in the home, Synology makes a great, affordable box that not only has very quick and easy installation and configuration, but has all the expandability of its big-brother boxes. Again, my initial “first-look” tests were not very demanding and were only to see if the stutter and jitter problems with large media files were rectified by the addition of hardware transcoding, and in my lightweight tests the Synology DS216+ passed with flying colors.

Take a photo from my “good side,” please…

As noted above, Synology shipped this model to me for review with no expected remuneration or guarantee of a blog review. I purchased the disks myself, and there was absolutely no editorial contribution from Synology whatsoever.