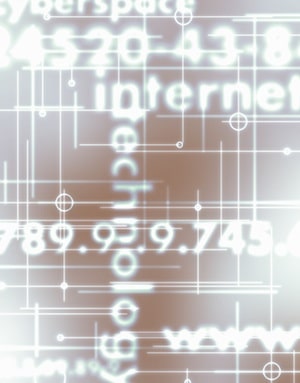 Today Synology launched their new DiskStation Manager (DSM) 6.0, one of the biggest overhauls of the OS to date. Among the major feature updates is a profound bolstering of their snapshotting, backup, and archiving functionalities.

I’ve written extensively about Synology’s Backup functionality for DSM 5.2 (Part 1, Part 2, and Part 3), but have held off on pulling the trigger on a Cloud-based “part 4” for a variety of reasons (which are better left for a different post). With DSM 6.0 there are more than just a few “under-the-hood” changes, and some of the language in the announcement made me raise an eyebrow.

Synology is heavily pushing the enhancements to the backup capabilities in DSM 6.0 (just in time for World Backup Day, which is great because if they have actually managed to streamline the process (as seen in Parts 2 and 3 above, which were quite clunky at times) it will do wonders for getting people to backup their data properly.

Even so, they are promoting a few elements that could be noteworthy if they work properly:

Backup Filters. Synology lets you choose what files and folders that you want to back up using filters. These include filters-by-name, file type, and size. We’ll see if these filters can be customizable.

Incremental Backups and Versioning. DSM 5.2 was able to do incremental backups too with versioning, so this does not sound new (but I haven’t checked either, so…)

Snapshots. Snapshots and backups are not the same thing, and this is likely to come into play with Synology’s use of btrfs as the underlying file system (which does snapshots rather well).

Extended Replication. Synology is making the claim that you will have more advanced replication capabilities, including “Daisy chaining” (copy-on-write) replications from primary to secondary to tertiary sites. They’re also including support for importing replication data for large data sets so that you can avoid lengthy and expensive WAN importing.

Flexible Policies and Schedules. Pretty much what it sounds like, Synology is promoting the ability for you to determine your own backup schedule and retention policies. Again, this is not new (this is also available in DSM 5.2), but hopefully they’ll have made it a bit more intuitive.

Hyper Backup Vault. If you happen to have more than one Synology system that is collecting data from multiple sources, DSM 6.0 now allows you to have a single application to – as they call it – have “a bird’s eye view of the storage consumption and backup history of each task.”

I haven’t had a chance to do much, as I only downloaded and installed DSM 6.0 today on the DS216+ and it’s a system that I can afford to brick if things go horribly wrong.

What I did notice was that there are many more choices for cloud providers than before (even though I’m leaning towards not using them): 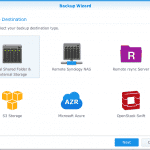 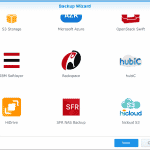 The first thing I noticed was that the “Backup and Replication” app from DSM 5.2 has been replaced with “Hyper Backup.” Not having any backup tasks created, the Backup Wizard immediately starts up (see screenshots above).

I select a Remote Synology NAS, as I already have my Synology DS1511+ acting as my existing repository, and I was curious to see what kind of compatibility issues there might be.

The fields were already populated with existing Synology systems on my local network (not surprising), but when I tried to select the Shared Folder that would be the repository for this DiskStation’s data, I got a no-go:

So, it looks like there are some incompatibilities between the existing DSM 5.2 backup strategies I’ve been using and the new DSM 6.0 mechanisms.

What I Need To Know

There are quite a few things that need to be straightened out before I move wholesale to the DSM 6.0 platform, I think. At the very least, I need to know the answers to several questions (and possibly more; these are just the few off the top of my head):

When did btrfs become the default FS for Synology? Synology’s main DSM 6.0 information page seems to indicate that this is new for 6.0, but I’d like to be sure.

Are we using RAID 5 or 6 with Btrfs or with ext4? Btrfs does not have a good reputation for RAID 5 or 6, and commentary as recent as 6 months ago seems to indicate that while the integrity is getting better, there have still been reports of data loss from stability issues. If, however, we’re using RAID 5 or 6 with ext4, does this mean that we are losing the benefits of btrfs’ superior snapshotting capabilities? In other words, are we going to have to choose?

Migrating from DSM 5.2 to 6.0. What happens if you upgrade-in-place? What happens with the existing data? Is this a metadata format change?

Are there incompatibilities between existing backups from 5.2 and HyperBackup in 6.0? How much of a forklift upgrade is there going to be with respect to accessing existing backup data, or can it be seamless? I’ve already seen in the backup wizard that it’s not perfect, so it remains to be seen just how much “not perfect” it winds up being.

What is the best practice for migration of backup files from 5.2 to Hyper Backup in 6.0? Pretty self-explanatory, however the DSM help files are notably sparse on the details here. The typical “click here, choose that” descriptions are there, but there is very little in terms of knowing what it is that you are actually doing when you make certain selections.

What are the known issues in upgrading to DSM 6.0 with established backup policies from other (local) Synology Diskstations? This is critical. I’ve looked through the notes that were available to me (at the time of this writing), and so far I have not seen any technical documentation indicating caveats or known issues that might result in catastrophic data loss, or roll-back procedures to a stable state between mismatched Diskstations. That is, if I want to make sure that my DS1511+ (with the master repository of all backups) is solid at all times, and something goes wrong with the upgrade process, what are the options for restoring DSM 5.2 data into a DSM 6.0 (assuming that there is no downgrade capability, like there was from 5.0 to 4.x).

I’ve sent in questions to Synology with regards to these items, and I’ll be happy to report back whatever I can when I get the answers.