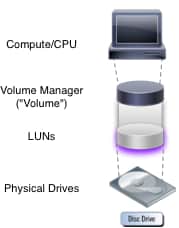 Any time you learn a new topic, you have to get used to the terms and how they’re used. Like most tech, storage people have their own jargon. Anyone new to storage has to figure out not just what the words mean, but why it seems like we use different words to mean the same thing.

Such is the case with LUNs and Volumes. In storage, they’re often used interchangeably, and people just learning about the subject can get lost.

Hosts need Volumes, so those volumes have to be made up of something that eventually sits on a real, physical drive (whether it be spinning drives or SSDs, etc.).

Your laptop, for example

Look at the simplified diagram to the right. From the “top down,” then, a Host sees a Volume. That Volume, in turn, has to be made up of something that, in turn, can be interpreted (eventually by physical media). From the storage’s perspective, the physical media is broken down from a physical entity (the actual drive), into a logical entity, and given a number (hence the “Logical Unit Number”, or LUN).

In between there is a very important piece of software that makes a translation between that LUN and what the host can see as a Volume, called the Volume Manager.

Why go through all this work?

When storage requirements grow, so does the need to add in methods for protection, scale, performance, and other nifty features. On top of that, there needs to be room for networking capabilities as well.

Many modern systems that are in use today have a relationship between Volumes and LUNs that look like this: 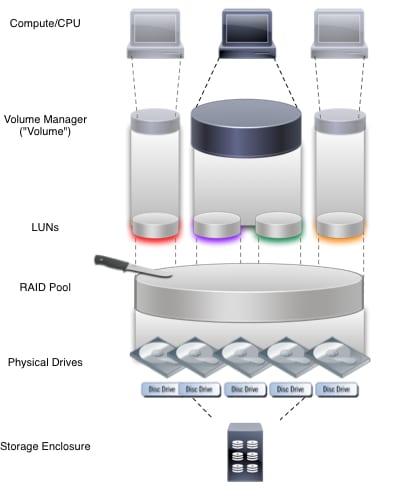 A “simplified” diagram in a larger environment

Looking from the bottom-up, the media is located inside of some sort of storage enclosure, and is often pooled together into a logical format via a system called RAID (RAID, depending on the methods used, can improve performance and resiliency).

That pool, in turn, is carved up into LUNs – the exact same kind of LUN we used in our simple example above. Those LUNs are then provisioned to hosts. Many times there is a 1:1 relationship between LUNs and Volumes, but it does not have to be that way. Volume Managers are capable of taking more than one LUN and logically combining them into a single entity to present up to the host as an individual volume.

So, LUNs and Volumes can be the same thing, and they are related, but (especially in SANs), the usually are not.

If you want to find out more about this, and RAID and a few other things, I recommend you look at the SNIA BrightTalk webinar, “Everything You Wanted To Know about Storage But Were Too Proud To Ask – Part Chartreuse.”

[NB: I originally posted this answer in Quora.com]