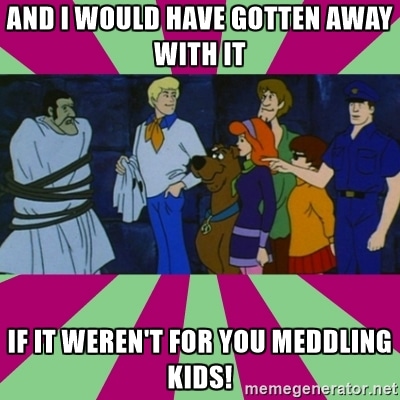 Just had a really scary thought.

Clinton deliberately avoided many possible constituencies in order to focus on “young, college-educated suburban voters.” She ignored many of the previous constituency that had voted for her husband as well as Obama.

This much is known and well-understood.

What’s scary is just how close she got to pulling it off. She managed to gain the popular vote by proving the point of America as “flyover” country. She deliberately ignored the bulk of the country to effectively buy the votes of the most populous regions.

If it weren’t for the Electoral College, she would have gotten away with it. Future presidential candidates may or may not follow in her footsteps; if they do, it underscores that the Founders were correct. Democracy (mob rule, popular vote takes all) is a recipe for domination and serfdom.

I’m not on Facebook, but I’m told that this analogy has been making the circuit: does the winner of the World Series win by the most runs, or by winning the largest number of games? (In case you’re not a fan of baseball, it’s the latter).

Most of the time, the winner of the World Series scores the most runs as well. Scoring runs is how you win games, after all. This is not to say that there haven’t been World Series where the winning team has actually scored fewer runs than the losing team (e.g., the 1960 World Series between the NY Yankees and Pittsburgh Pirates).

Population is not completely eradicated from the equation, of course. The number of electoral votes are related (in part) to the population of a State. This sword is designed to cut both ways – “Larger” States gain electoral votes based on population, which in turn prevents “smaller” States (by population) from wielding unreasonable power and influence over an election – just like larger States cannot simply dominate elections because they have more people.

This becomes incredibly important. The bulk of the US population lives within 15 miles of the coast (around 40%) and in major cities (around 80%). This leaves about 20% of the population living in rural (i.e., non-urban) areas.

If a picture is worth a 1000 words, take a gander at this visual essay: 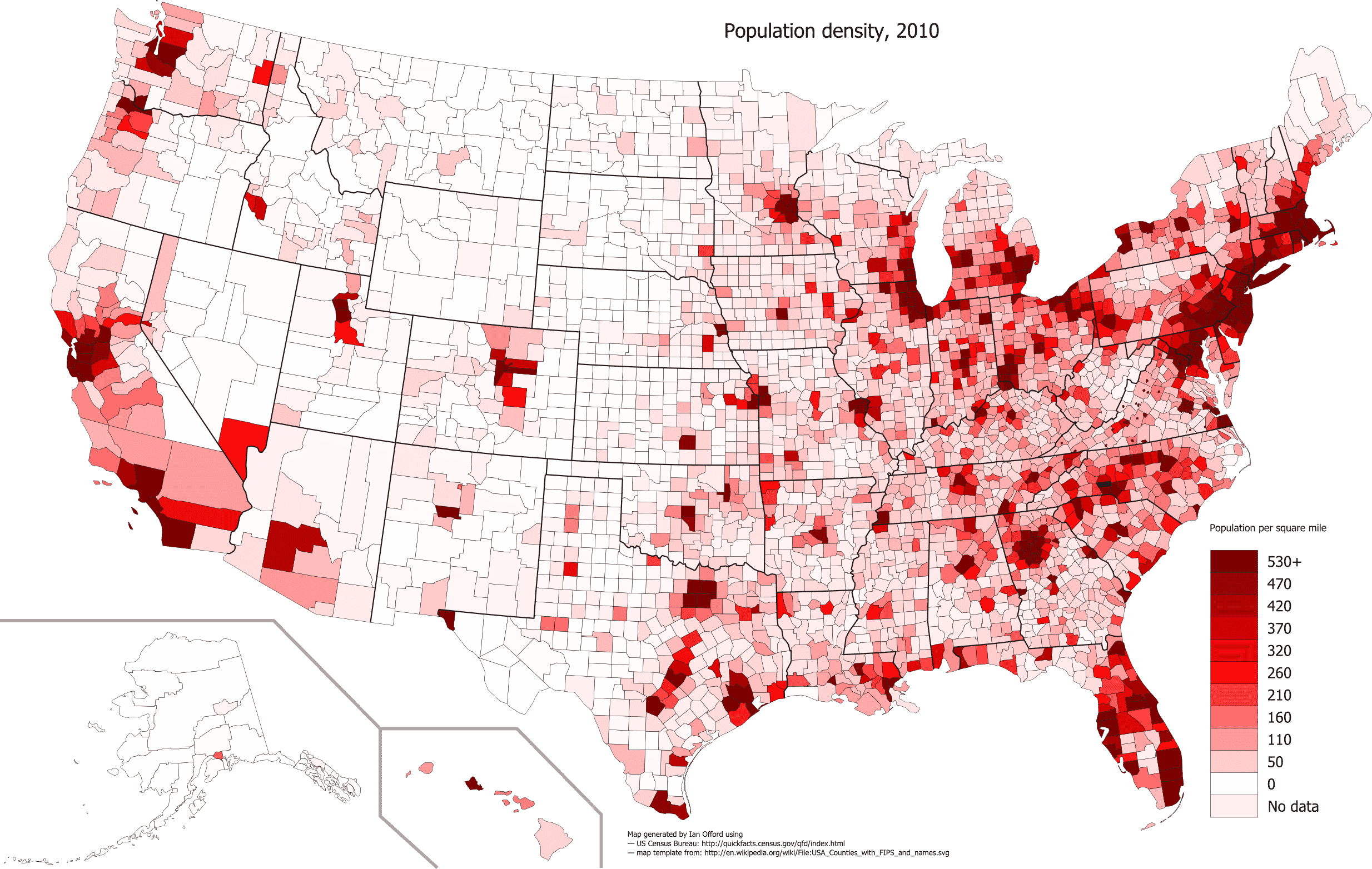 Here it’s easy to see the results of population density on the election, versus outright population. This becomes critically important as you start to understand what the geography represents.

Take a look, for instance, of the 2007 map (most recent I could find) of the percentage of U.S. Farmland: 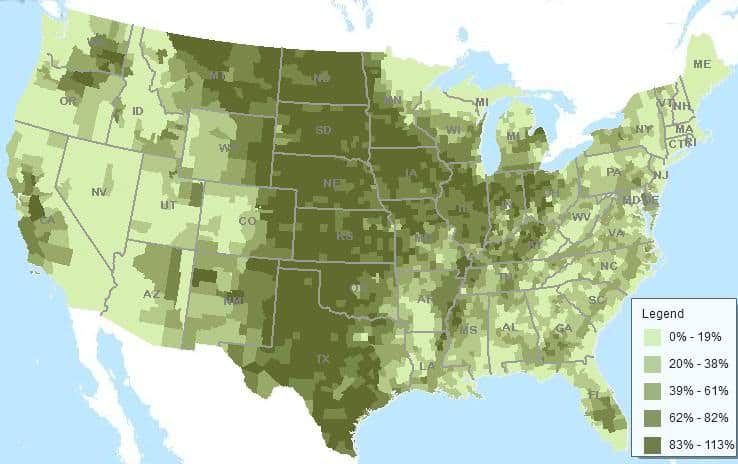 Notice any patterns? This is just one example, but it’s very important: the maps are almost entirely inverted.  Big cities/urban areas cannot feed themselves. They must import food from elsewhere.

Clinton banked (incorrectly, as it turned out) on focusing entirely on the highly populated urban centers for her message. If you look at the population map above, and the election map for 2016 below, you see some striking similarities: 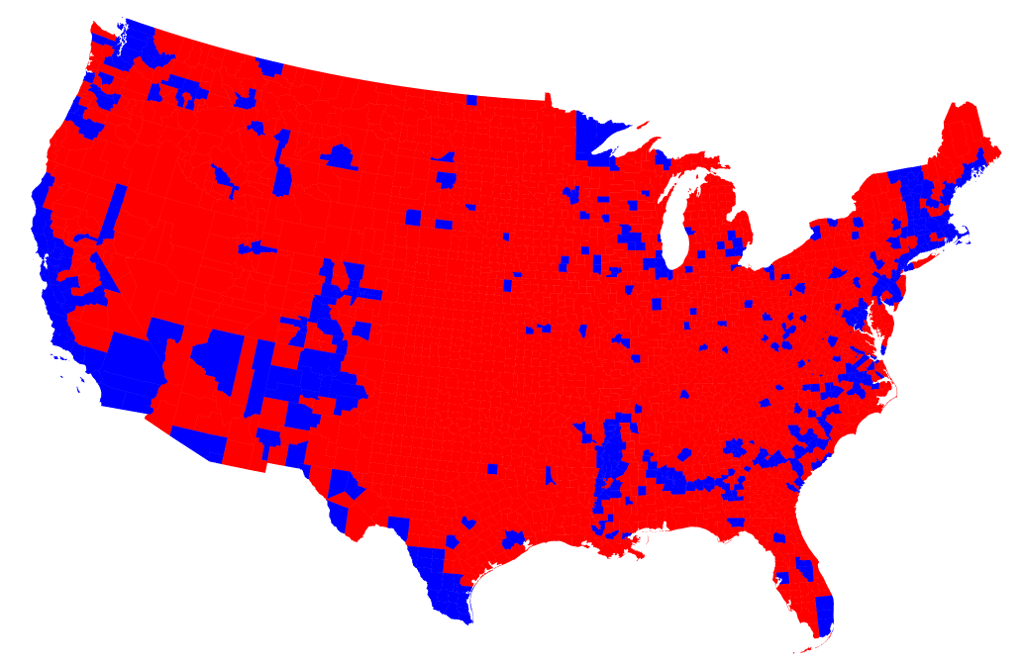 What Clinton attempted to do – overtly, and explicitly – was appeal to the very population that cannot feed themselves unless at the expense of the population that can. Clinton took millions (around half-a-billion dollars) from banks, foreign governments, and donations in order to polarize the country. It could be argued that “Stronger Together” meant exactly what she practiced: She tried to make the highly urban areas “stronger together” at the expense of the country that feeds them, people that she considered “deplorable.”

Hyperbole? Perhaps, but it certainly is consistent with her behavior. Clinton’s mathematical misstep was not in estimating the demographic population (she won the popular vote), but outright disdain and vitriol towards geographic areas. The only reason why vast swaths of farmland aren’t merely serfdoms of cities right now is due to the Electoral College.

[NB: I recommend taking a look at Dr. Mark Newman’s maps of the 2016, which represents the election patterns in striking visual cartography.] 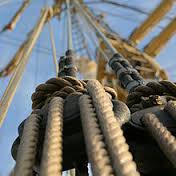 There was a lot of talk about rigging the election, and while there were instances of voter fraud, nothing screams “rigging” like the petition to overturn the election results that currently has over 4.5 million signatures. This is like the Yankees attempting to retroactively change the rules of the World Series in 1960 to simply count the number of runs instead of the number of games.

With all the gnashing of teeth about whether or not Trump was going to recognize Clinton if she won, this behavior is simply bizarre. It’s not as if the rules weren’t clearly stated before the election!

The violence underscores a darker, seedier side of the election: if the outcome of the election was guaranteed (either by votes or by violence), why go through the charade of having an election in the first place?

It underscores Clinton’s strategy to appeal to a specific demographic – one that will not hesitate to overturn the rules and regulations to get what they want, to commit heinous acts of vandalism, violence, and terrorism. This behavior – change the rules of the election after it’s completed – exemplifies the very definition of “rigging.”

To that end, Clinton chose her army of Social Justice voters well. An entire constituency that is used to getting its own way and violently throwing temper-tantrums when they don’t, is precisely the kind of voting block you want to have on your side. It’s no wonder that – as of the time of this writing – she has not criticized the violence that has been done in her name by her voters.

As I said at the onset, this is what scares me. I fear that Clinton’s model of outright disdain for an entire population is not a one-off, isolated incident. I think that future politicians will attempt to capitalize on the current anger towards the Electoral College to 1) push for its elimination so that they can 2) succeed where Clinton failed.

In a rare moment of transparency, we saw precisely what Clinton thought of her constituency. She hated the people that weren’t going to vote for her so much, she blatantly avoided them at all costs. She, and her campaign, outright refused to even consider reaching out.

President Bill Clinton was eager for his wife to attend [a prestigious event at the University of Notre Dame]. But Mrs. Clinton’s campaign refused, explaining to the organizers that white Catholics were not the audience she needed to spend time reaching out to.

And she ceded the white working-class voters who backed Mr. Clinton in 1992. Though she would never have won this demographic, her husband insisted that her campaign aides do more to try to cut into Mr. Trump’s support with these voters. They declined, reasoning that she was better off targeting college-educated suburban voters by hitting Mr. Trump on his temperament.

“Early on, Mr. Clinton had pleaded with Robby Mook, Mrs. Clinton’s campaign manager, to do more outreach with working-class white and rural voters. But his advice fell on deaf ears.”

“Former Gov. Edward G. Rendell of Pennsylvania also said he had encouraged campaign aides at Mrs. Clinton’s Brooklyn headquarters to spread their vast resources outside Philadelphia and Pittsburgh and focus on rural white pockets of the state. “We had the resources to do both,” Mr. Rendell said Wednesday. “The campaign — and this was coming from Brooklyn — didn’t want to do it.” (Mr. Trump won Pennsylvania by one percentage point.)”

This has been her modus operandi for her entire career, ignoring or outright demeaning people who weren’t capable of pushing her career forward. People like that were obstacles to avoid or overcome, and not worth her time. If you have followed her rise to power (through an open seat in New York as a Senator, where she had never lived, and the people she courted there to elect her), to her stint as the Secretary of State (where her policies of neglect were so egregious she contributed to the deaths of Ambassador to Lybia and four SEALs), you’ll see consistency across the board.

Even so, this is not intended to be an indictment of either Clinton or how she ran her campaign. Instead, it is an indictment of the people who wish to change the rules of the game (i.e., eliminate the Electoral College), to allow Clinton – and demagogues like her – to surgically strike on the most populous environments.

Note the emphasis on the word “yet”:

“The emerging demographic majority isn’t quite there yet,” said Anita Dunn, a Democratic strategist and former White House communications director. “The idea that you get to a presidential campaign and just press a button and they’ll vote, it’s not there yet.”