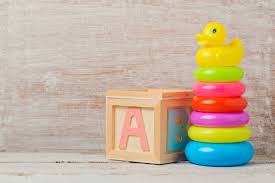 A while back I wrote an article entitled “NVMe™ for Absolute Beginners.” It seems to have resonated with a lot of people and it appears there might be a call for doing the same thing for NVMe™ over Fabrics (NVMe-oF™).

This article is for absolute beginners. If you are a seasoned (or even moderately-experienced) technical person, this probably won’t be news to you. However, you are free (and encouraged!) to point people to this article who need a start in Plain English™ to get started.

Any time an application on a computer (or server, or consumer device like a phone) needs to talk to a storage device, there are a couple of things that you need to have. First, you need to have memory (like RAM), you also need to have a CPU, and you need to have something that can hold onto your data for the long haul (also called storage).

Another thing you need to have is a way for the CPU to talk to the memory device (on one hand) and the storage device (on the other). Thing is, CPUs talk a very specific language, and historically memory could speak that language, but storage could not. 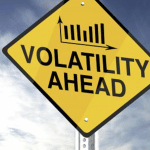 For many years, things ambled along in this way. The CPU would talk natively with memory, which made it very fast but also was somewhat risky because memory was considered volatile. That is, if there was a power blip (or went out completely), any data in memory would be wiped out.

So, you wanted to have your data stored somewhere permanently, a.k.a., on a non-volatile medium. For many years, that meant hard disk drives (HDDs). This was great, and worked well, but didn’t really work fast.

Solid State Disks, or SSDs, changed all that. SSDs don’t have moving parts, which ultimately meant that you could get your data to and from the device faster. Much faster. However, as they got faster, it became clear that because the CPU didn’t talk to SSDs natively using the same language – and needed an adapter of some kind – we weren’t getting as fast as we wanted to be.

NVMe changed the nature of the game completely. For one, it removed the need for an adapter by allowing the CPU to talk to the storage natively. (In technical terms, what it did was allow the CPU to treat storage as if it were memory, with which it could already speak natively through a protocol called PCIe).

The second thing that was pretty cool was NVMe changed the nature of the relationship with storage from this: 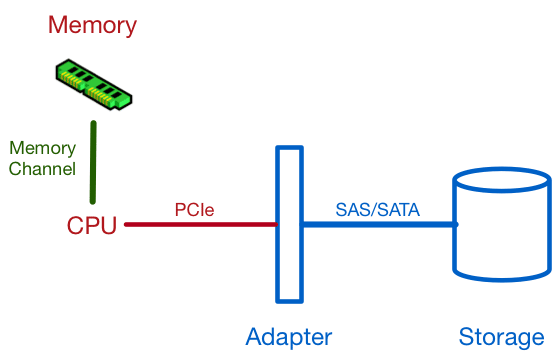 CPU needs an adapter to talk to storage

… which was necessarily a 1:1 relationship, to this: 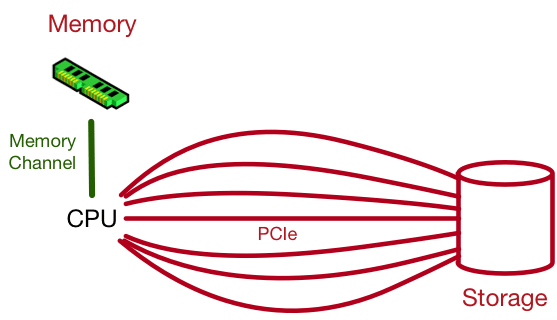 … which now meant that you could have more than one relationship between devices.

Since I wrote the “NVMe for Absolute Beginners” article a few years ago, the technology has taken off like wildfire. In only a few short years, there have been more NVMe storage drives shipped than the previous go-to technology (i.e., SATA).

By this point, there are many, many more articles written about NVMe than there were back then. Now, however, there are a lot of questions about what happens when you want to go outside of the range of PCIe.

Thing is, NVMe using PCIe is a technology that is best used inside a computer or server. PCIe is not generally regarded as a “fabric” technology.

So what is a “fabric” technology, and what makes it so special? 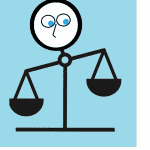 In general terms, a “fabric” is that “something special.” It’s not as easy as putting a storage device at the end of a wire and calling it quits. Oh no; there is so much more that needs to be done. 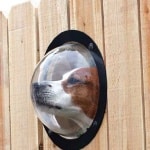 Going outside… but not too far outside!

Any time you want to go outside of a computer or server, you need to be extra careful, because there are a lot more things that can go wrong. As in, an exponential number of things can go wrong. Not only do you need to try your best to make sure that things don’t go wrong in the first place, but you need to put systems in place to handle those problems when they do.

The good news is that there are a lot of choices when it comes to solving this problem. These storage networks have been the tried and true means by which people have handled storage solutions at scale. Technologies like Fibre Channel, Ethernet and InfiniBand have been used to connect servers and storage for years. Each one has its place, and each one has its fans (and with good reasons).

There was no reason for the NVM Express group (the people behind the NVMe protocol) to create their own, new, fabric. Why re-invent the wheel? Instead, it was much better to use the battle-hardened technologies that were already available.

That’s why it’s called NVMe over Fabrics; we are simply using the NVMe protocol to piggy-back on top of networking technologies that already exist.

The Magic of Bindings

Imagine you’re building a Jeep (yes, this example comes from personal experience). At a rough glance, you have two basic parts to a Jeep –  you have the chassis, and you have the body. As you can imagine, you can’t simply place the body on top of the chassis and start driving around. The body is going to eventually slide right off the chassis. Not exactly safe.

By the same logic, we can’t simply place the NVMe commands on top of a Fabric and expect, magically, that everything is going to work out all the time. Just like our Jeep body, there needs to be a strong connection with what happens underneath.

In NVMe-oF parlance, these are called bindings.

Bindings solve a number of problems. They are the glue that holds the NVMe communication language to the underlying fabric transport (whether it is Fibre Channel, InfiniBand, or various forms of Ethernet). 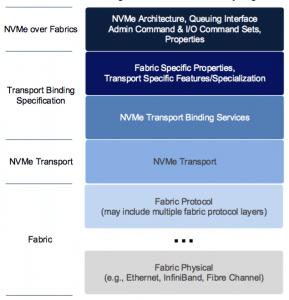 If you consider that with networking technology we think in terms of layers, the NVMe over Fabrics bindings sit on top of the transport fabrics layer, and it is the responsibility of the organizations who represent those transport fabrics to make sure that there are appropriate connections into the bindings from the other side.

For instance, the T11 Standards body is responsible for creating the changes to the Fibre Channel standards so that it can interact with the bindings appropriately, not just transport the NVMe commands from one side to the other.

You can find out more about how this works in the Fibre Channel example by watching the FCIA BrightTalk Webinar – Introduction to FC-NVMe by yours truly and Craig Carlson from Cavium, now Marvell). 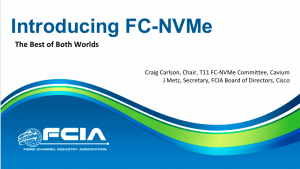 One example of a NVMe-oF implementation

Now, I’ve given you an example of one type of Fabric that can be used for NVMe-oF, but Fibre Channel is not the only one. In fact, the magic of NVMe-oF is that you can choose one from a number of transport types: 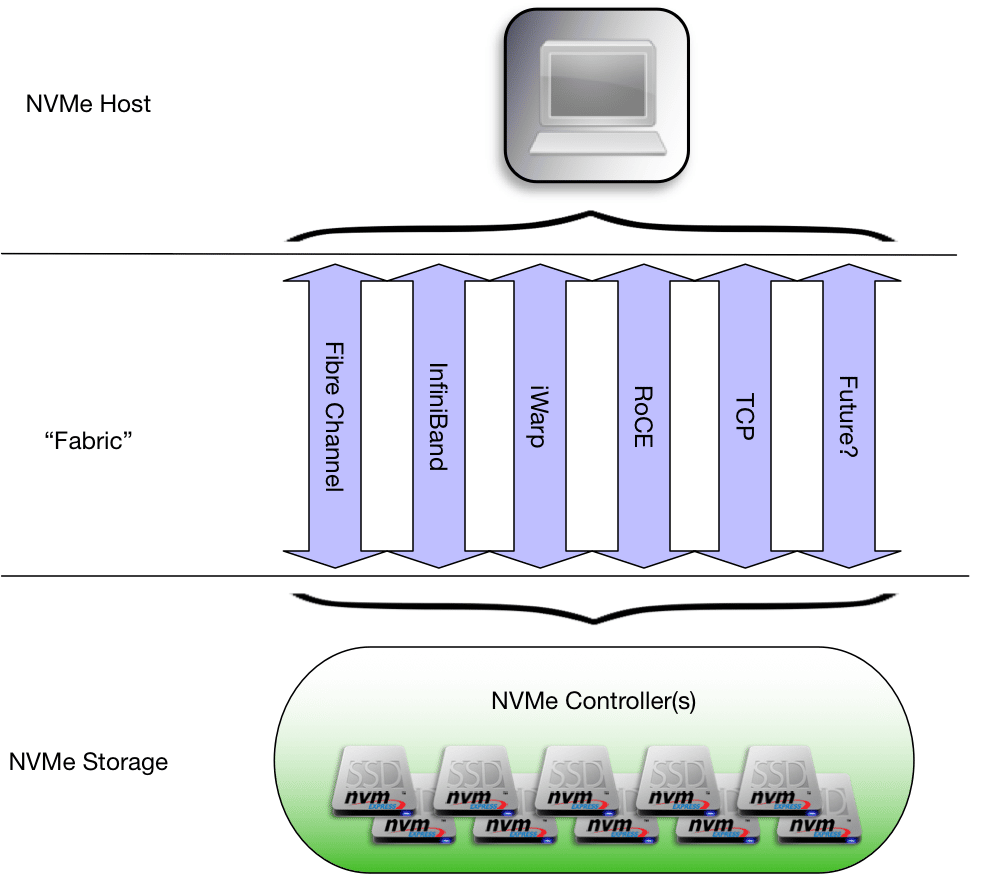 In other words, NVMe over Fabrics really is the glue that holds the other pieces to the network transports.

To Bind or Not To Bind 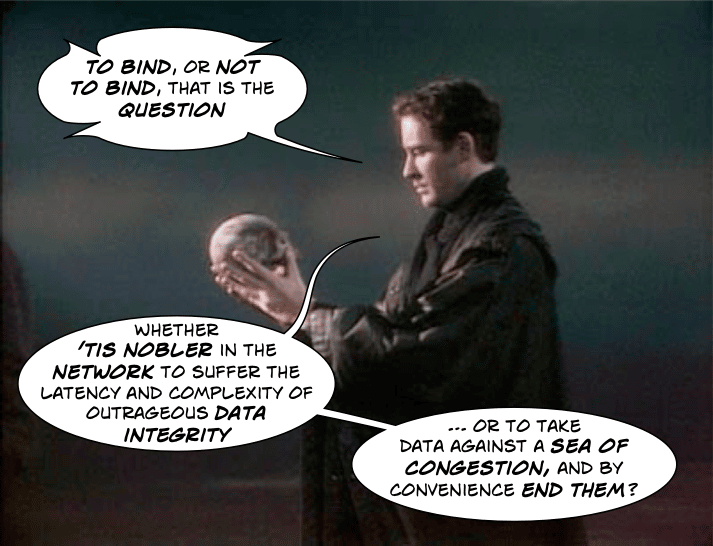 Man, that Shakespeare dude was good!

Now, it’s important to know that just because the NVMe Express group defines the bindings format for NVMe-oF™ (the ™ is intentional, here), it doesn’t mean that this is the only way to do it. In fact, before the NVMe over Fabrics standard was ratified, there were quite a few companies who created their own forms of moving NVMe commands from one device to another.

Let me be absolutely clear here: there is nothing wrong with this!

Just because someone has a solution that isn’t standardized does not mean that they are doing something wrong or, worse, doing something nefarious. All it means is that they have figured out a different way to handle the means by which they send NVMe commands from one place to another.

It’s valuable to know whether or not a company is using a standardized version of NVMe over Fabrics, or whether someone is using a proprietary version of using a fabric to transport NVMe. The reason why it’s important is that storage is an end-to-end problem that needs solving, and you need to know how all of the parts fit together, and what (if any) kind of special attention needs to be made in order to make everything work together seamlessly.

For that reason, even though the acronym NVMe-oF™ looks funny1, it is the official acronym for NVMe™ over Fabrics. There are a number of other popular acronyms, however, that have been used to represent networked NVMe:

Most of the time these are innocent and harmless mistakes, or simply affectations for a different type of acronym. The problem comes when a vendor uses a different acronym because it looks like they are using a standardized version of the bindings when in fact it is not.

Taking advantage of people’s ignorance over the proper terminology in order to make your product look like it’s something it isn’t is, well, it’s uncool. You should especially beware if someone uses a trademark symbol (“™”) with an incorrect acronym.

NVMe over Fabrics is a way of extending NVMe outside of a computer/server. It is more than simply slapping the commands onto a network, and it still helps to know the pros and cons of each transport fabric as it applies to what you need to do.

Remember, there is no such thing as a panacea for storage. Storage still has a very, very hard job:

Give me back the correct bit I asked you to hold on to for me.

Everything that happens inside of NVMe and NVMe-oF is designed to help make sure that happens.

If you are interested in learning more about NVMe, and NVMe over Fabrics, may I recommend some additional reading and videos (whichever you prefer):

Please let me know if there’s any particular questions you want answered, or feel free to leave a comment below. Of course, if you think there is someone who could possibly use this information, you’re encouraged to forward them this article.