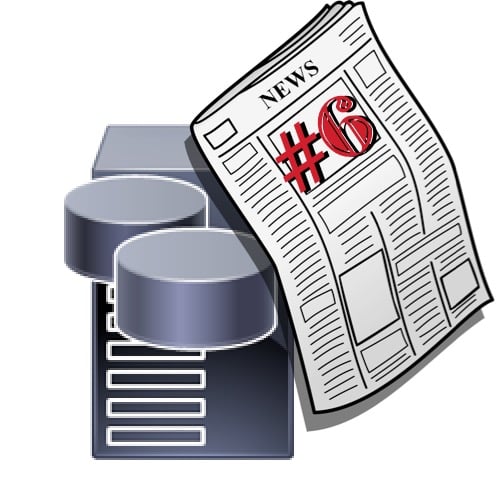 Well, here we are once again. It’s amazing how fast the past two weeks (and the year, already!) is flying by. There have been a couple more predictions that have come out, though at this rate any more that come out will likely simply be a recap!

Let’s get started with the Storage Short Take #6!

While not earth-shattering, Regni’s take on the trends is solid. One of the things that’s particularly important is his point about the Telco M&E activities of content providers. This is something that has been going on for 20 years, but FCC regulation in the US stymied it for a long time, and the technology available at the time simply wasn’t ready. We’re at a point, however, where the perfect storm of money, regulations, and technological capability is about to blow what we think we understand about content delivery wide open.

What’s more, the impact on the underlying infrastructure (and reliance on “edge” storage and compute) will require considerable focus. This is something that Regni also groks, and I think the only thing that’s preventing him from going into further depth is column inches – I’m sure he has much more to say on this, and so far I agree with him.

Honestly, I had hoped more from Arcserve. A data protection solutions provider, they are at the forefront of some of the most dangerous trends in the industry. The promise – and unmitigated threat – of AI is something that they gloss over far too readily with generic platitudes and non-predictive predictions.

Guara Yadav uses “on-premise” in the first paragraph, but perhaps this is a ESL problem. The rest of the article, however, doesn’t really illuminate anything we don’t already know. TL;DR: “Containers are good, but not all storage for containers is good. Oh, and #digitaltransformation, #innovation, #growth, #trust #blah #blah #blah.”

Finally, never expect a major earthquake announcement from a major vendor, especially from a Chief Strategy Officer. NetApp’s Gude naturally plays it safe in the predictions, which reads more like a State of the Storage Union than actual predictions.

Maxta’s Yoram Novick prepares us for ACI – no, not Cisco’s ACI, but rather “Abstraction Converged Infrastructure.”

If you’re only going to read one, the one worth reading is Scality’s Regni.

Following on with a previous Short Take’s discussion about optical storage media, one of the key challenges of ever-decreasing chip registers is maintaining the integrity of the data. One strong area of research involves using optical, non-volatile photonics memory. This research paper talks about a 5-bit cell for such a purpose.

A new form of RAID?

In this paper, we propose a Hybrid High reliability RAID architecture named H22-RAID, which combines SSDs with HDDs to achieve the high-performance of SSDs and the high-reliability of HDDs. To minimize the performance degradation caused by the low-performance HDDs, we design an HDD-aware backup strategy to coalesce the small writes requests… The experimental results show that we reduce the probability of data loss from 11.31% to 0.02% with only 5% performance loss, in average.

Synology has appointed Derren Lu as CEO, getting promoted from his CTO position. This will be interesting, as Lu is credited as expanding Synology’s product line’s capabilities.

Amazon has snatched Israeli disaster recovery software startup CloudEndure from the clutches of the Google empire.

Chris Mellor opens up a smaller-than-usual can of snark on early 2019 news of storage companies. One of the key bullet points he has is regarding the acquisition interest in Mellanox (as reported dutifully in Storage Short Takes 2 and 4). Mellanox has just brought in Doug Ahrens as CFO, which – as Mr. Mellor points out – doesn’t typically signal acquisition noises.

Chris gets a 2-fer bullet point in this issue of the Storage Short Take. Right after Cohesity took $250M in a Series D round, Rubrik took ~$250M in a Series E round, Veeam just sucked up half-a-Billion $$. In my head I get this visual of the VCs playing poker and upping the bidding in the pot. It’s just about time for the river. Who’s bluffing?

Oh, and is all that money well spent? Amazon Web Services just dropped a massive Big Blind into the pot by announcing it’s own backup service.

Didn’t know where else to put this, and perhaps I may need to start a R&D section, but IEEE has published research on SPDK Vhost-NVMe that looks interesting.

SNIA is extremely busy in the next month.

I moderated a webinar this week on Virtualization and Storage Networking Best Practices from SNIA NSF, run by the always-talented Cody Hosterman (Pure Storage) and Jason Massae (VMware). Hold onto your butts, this one goes fast.

I’m going to be co-presenting NVMe™/TCP with Sagi Grimberg, the lead author of the spec, on January 22, moderated by Tom Reu of Chelsio. The What NVMe™/TCP Means for Networked Storage webinar is sponsored by the SNIA Networking Storage Forum.

The SNIA Cloud Storage Technologies Initiative (CSTI) will be hosting two live webinars in February. The first one is Why Composable Infrastructure? on February 13th. It will define what composable infrastructure is (and is not) and then explain how composable infrastructure meets cloud data centers’ requirements to rapidly construct virtual pools of compute, network and storage based on the needs of particular customers or applications, then have those resources dynamically and automatically flex as needs change.

The second CSTI webinar will be on February 26th. What’s New in Container Storage brings back Keith Hudgins from Docker and Alex McDonald, the Chair of the SNIA CSTI to discuss the constantly changing container landscape. With new standards emerging every few months, you’ll learn what’s new, what to pay attention to, and how to get involved in the container community. If you don’t know Keith, he was a guest speaker at SNIA’s most popular webinar to date: Intro to Containers, Container Storage Challenges and Docker.

As I mentioned in my last Storage Short Take, SNIA’s Persistent Memory Summit will be in Santa Clara, CA on January 24th. Registration is complementary. If you’ve got questions on emerging memory, you can check out this Emerging Memory Questions Answered Q&A blog by Tom Couglin and Jim Handy.

The Persistent Memory Summit will be taking place during the week of the SNIA Annual Members’ Symposium (January 21-25). There is no cost to attend.

SNIA’s EMEA Storage Developer Conference will be held in Tel Aviv, Israel on January 30, 2019. In case you weren’t aware, Tel Aviv is a hot-spot for storage activity, and if you’re interested in storage development, this is definitely the place you want to be.

Want to go back to basics? The Great Debates series is going to cover File vs. Block. vs. Object Storage on February 5.

Also on February 5, SNIA NSF is hosting a webinar on Networking Requirements for Hyperconvergence.

I’ll be presenting a NVMe and NVMe over Fabrics Deep Dive (BRKDCN-2494) at CiscoLive-Barcelona on February.

Additional Synology security warnings can be found in Storage Short Takes 4, and 5.

Who says banks don’t innovate? USAA has been awarded a patent for “systems and methods for enabling failover support with multiple backup data storage structures.”

Also, IDC has written a couple of pay-for-play NVMe white papers, but good luck trying to get them. Something was wrong with the site whenever I tried to download them.

And now… a pretty picture.