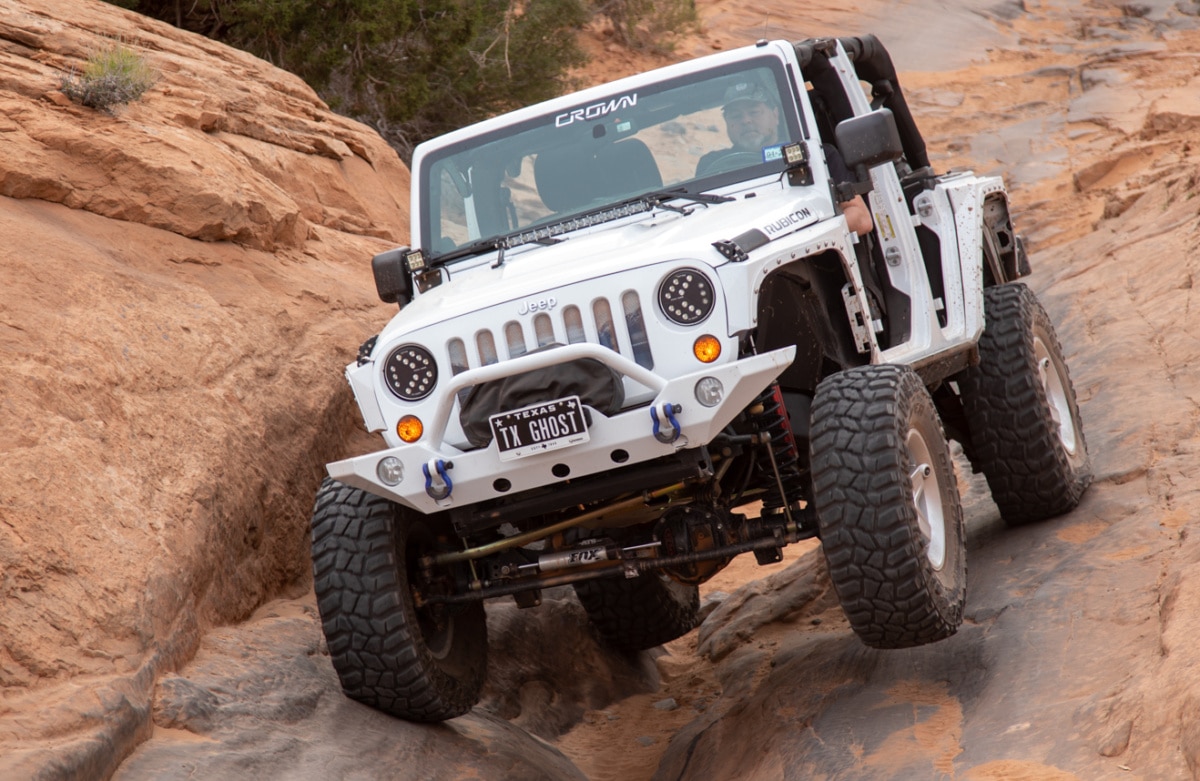 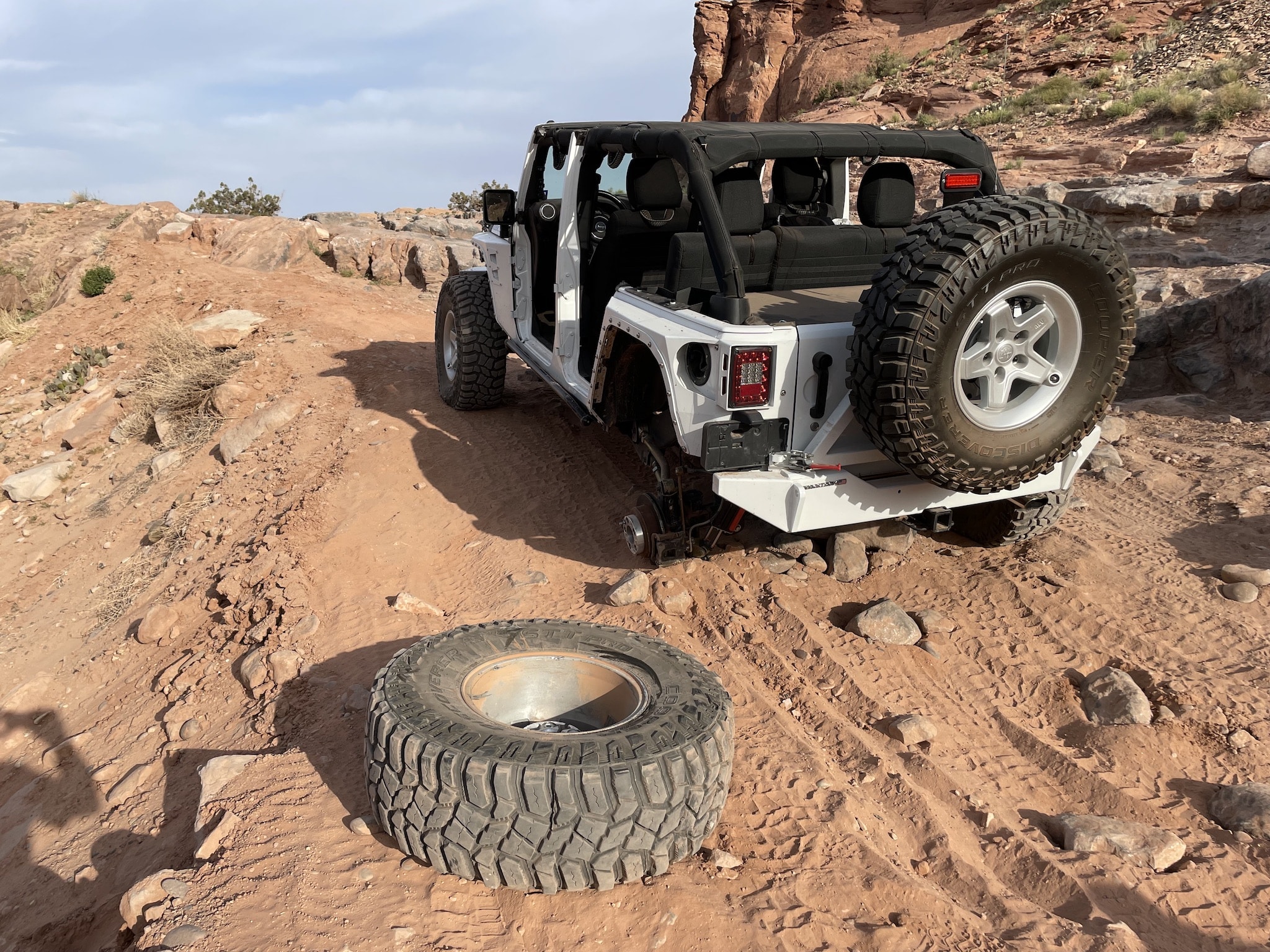 Unintentionally, my voice over the radio came across as snark, not panic. I’m not sure that was better, though. It was, after all, a disaster.

Dave had already crested the next obstacle, and I could see him out of the passenger side of my Jeep, which had no doors. He was looking down at me from the ledge, about 10 yards away, and almost as high up. He was heading in the opposite direction, so he looked through his passenger side to see what was going on.

“What’s happening?” he asked, an amused look on his face. I hadn’t rolled down the cliff (which was only a foot away), so it couldn’t have been an actual disaster, right? 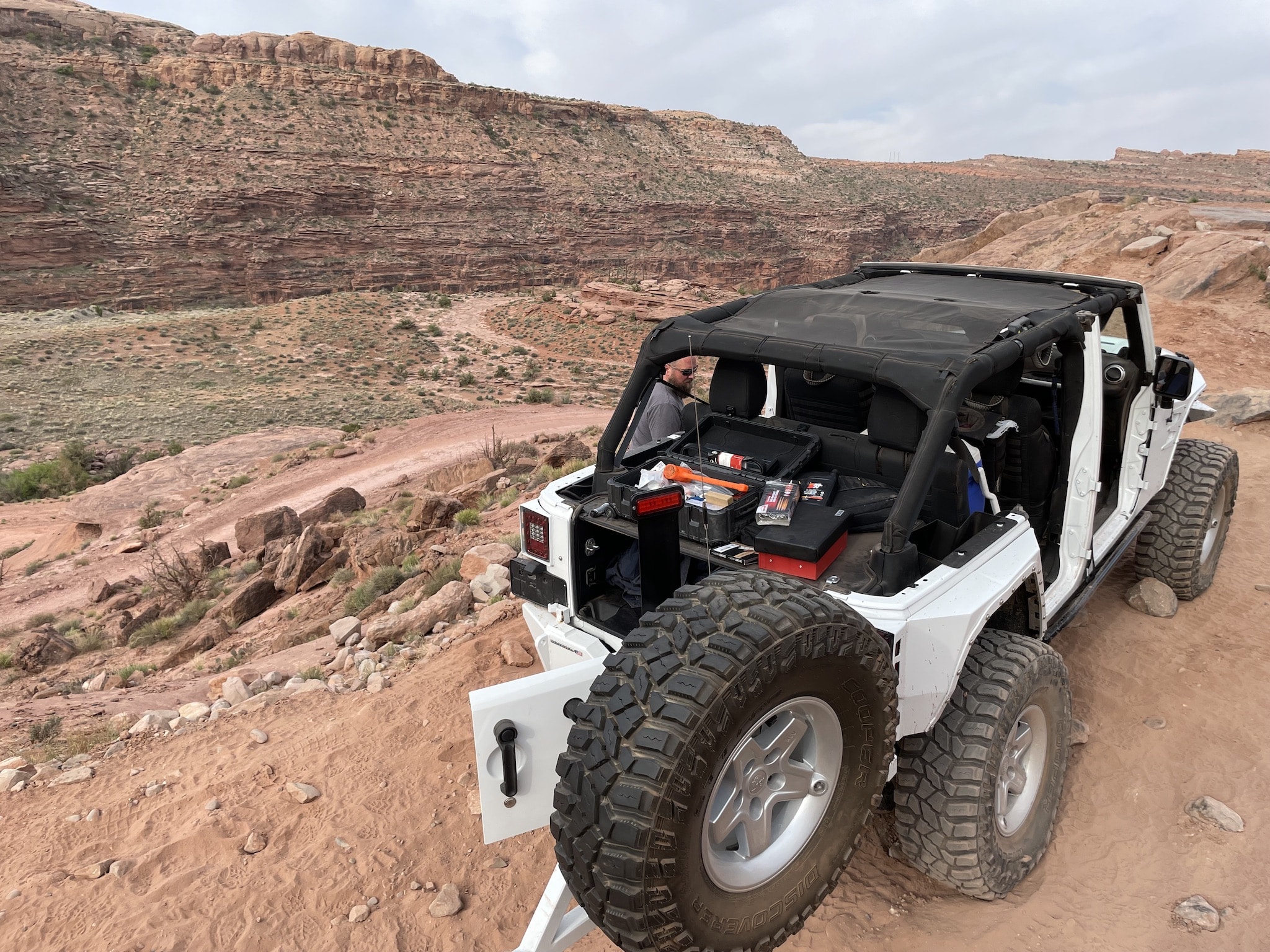 In truth, I wasn’t sure what I should have said. Mayday? It felt too dramatic. Houston, we have a problem? Too flip. In the end, Disaster! Disaster! came out of my mouth before I had the chance to self-edit.

“My wheel fell off!” I felt like I was shouting into the radio.

“What?” Dave asked, not sure he heard me right. But then he looked behind my Jeep. The wheel was there, lying on the ground like a beached whale. “Oh shit!” he said. “Hang on, I’ll be right there.” 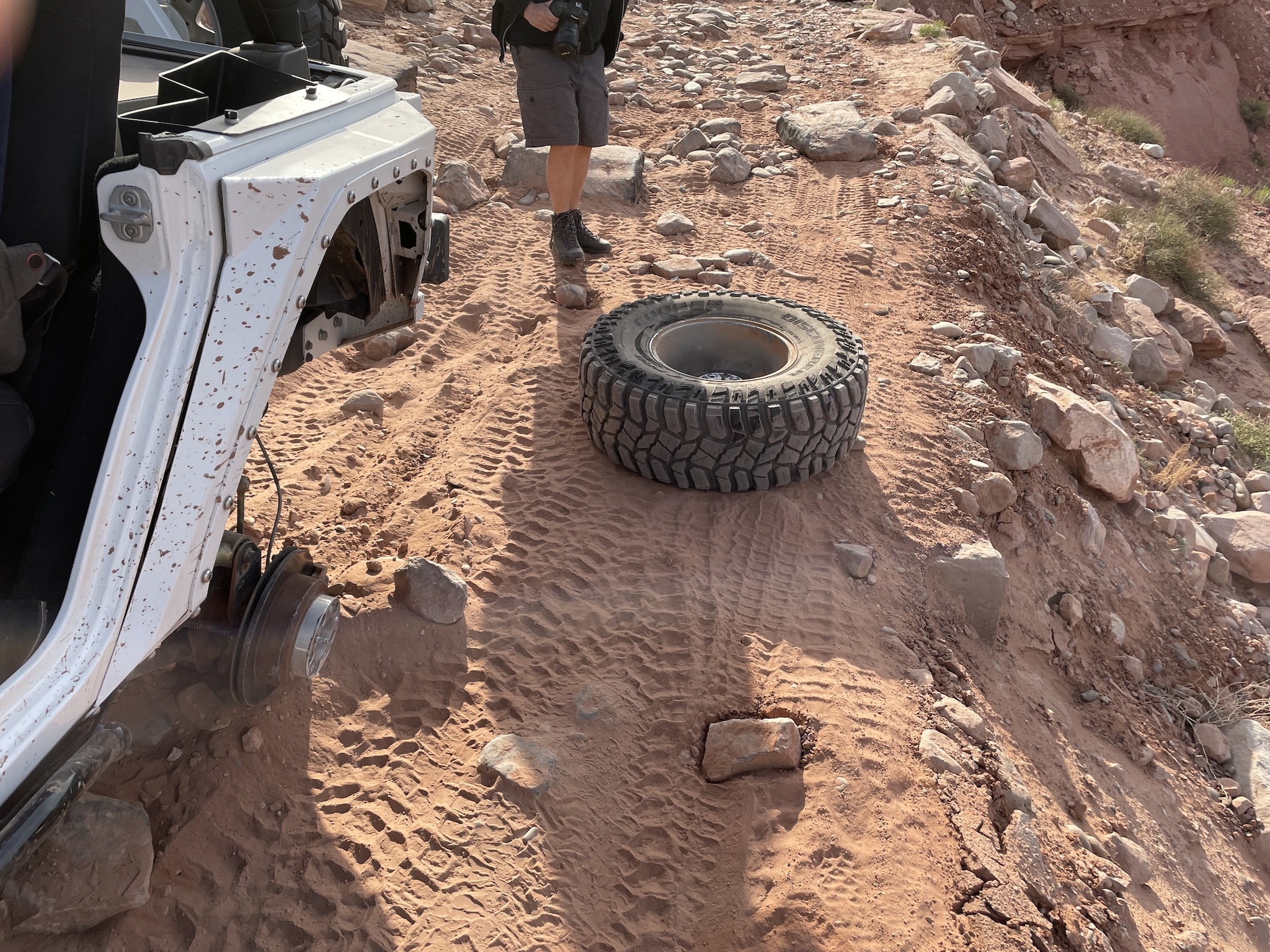 Photo taken immediately after getting out of the Jeep.

Ghost had been driving funny all the way to Golden Spike. There was a clicking noise that seemed to alternate between the rear wheels from time to time, but it was intermittent. I couldn’t seem to figure out if it was real, or just some of the road noise that you get when driving a Jeep with no doors or roof.

When we arrived at the starting point to Golden Spike, I had told Dave that I needed to check the rear of the Jeep, and I did. I crawled around the rear axle, the wheel, the shocks, and found… nothing. I checked the passenger rear as well, in case the noise had come back through some echo off the canyon walls. Again, nothing.

The drive had been squirrelly, though. Something was definitely off, and I had been frustrated that I couldn’t find out what it was. Little did I know, I’d find out in less than a half hour.

The initial climb of Golden Spike isn’t particularly tough. It consists of switchbacks up the mountain, and the drive had been pretty uneventful for the first hundred vertical feet or so. I was coming up to the first real challenge, when all of a sudden I heard a soft, deep thump, and Ghost’s rear driver side just sort of “sat” down.

I looked back and saw – to my horror – my wheel had broken off the axle. 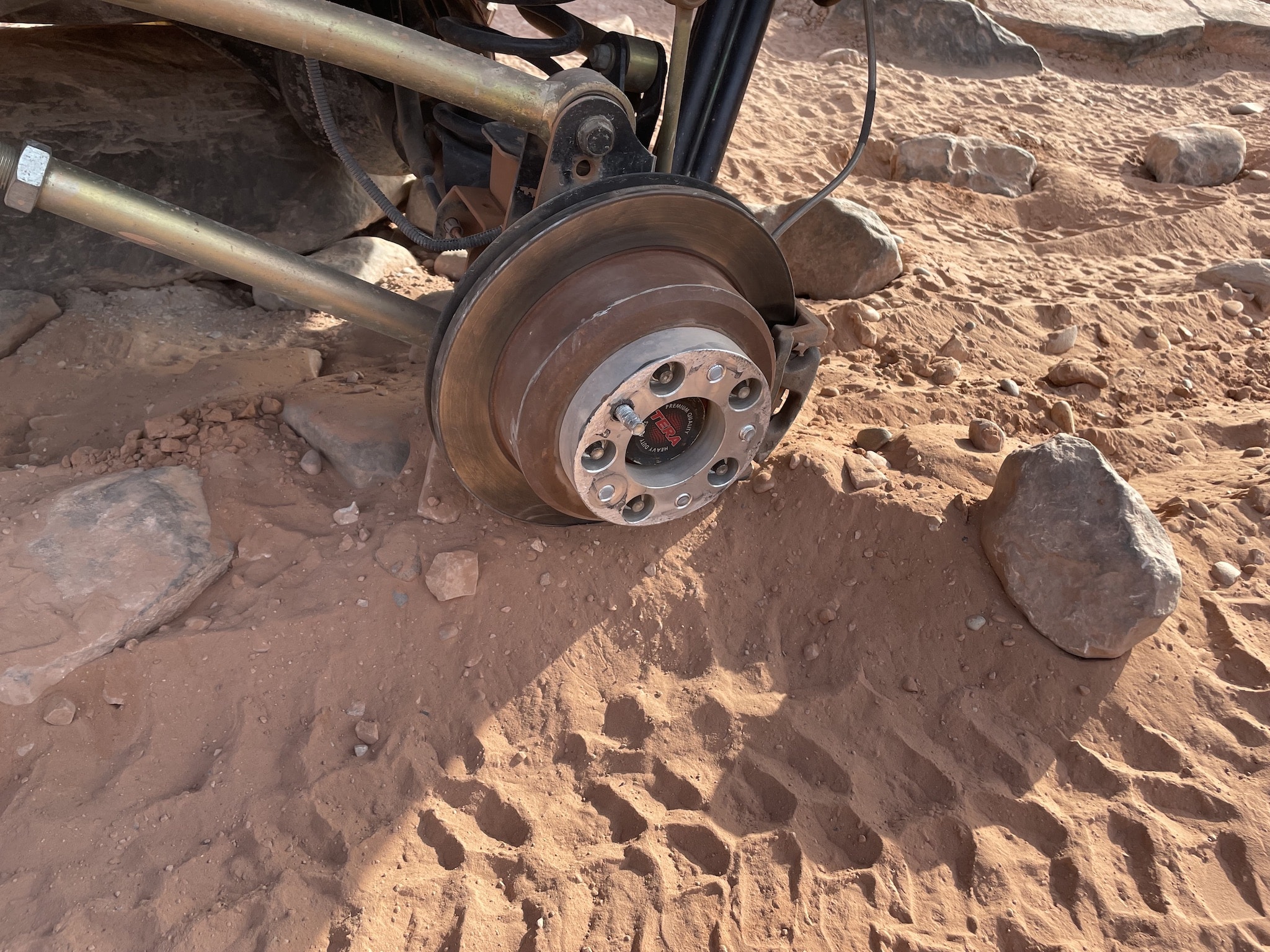 Plonk! Note how close it came to the rocks.

To make matters worse, I had forgotten my jack. Left it right next to the lift in my workshop, where it did me no good (the insult to that injury is that I had spent hours looking for a jack for the recovery kit, and simply wound up forgetting to put it with the rest of the tools to pack in the Jeep. I won’t make that mistake again!).

Dave – ever the calm and collected one – brought his HiJack down to Ghost and surveyed the damage.

“Remember when I told you I hated spacers?” he asked.

It had been last week. Dave came over to the house to help get Ghost ready for the trip. He saw the spacers that the previous owner had put on the Jeep, and commented that while it would probably be fine for the trip, he didn’t like them because they were extra points of failure.

They were not fine for the trip. 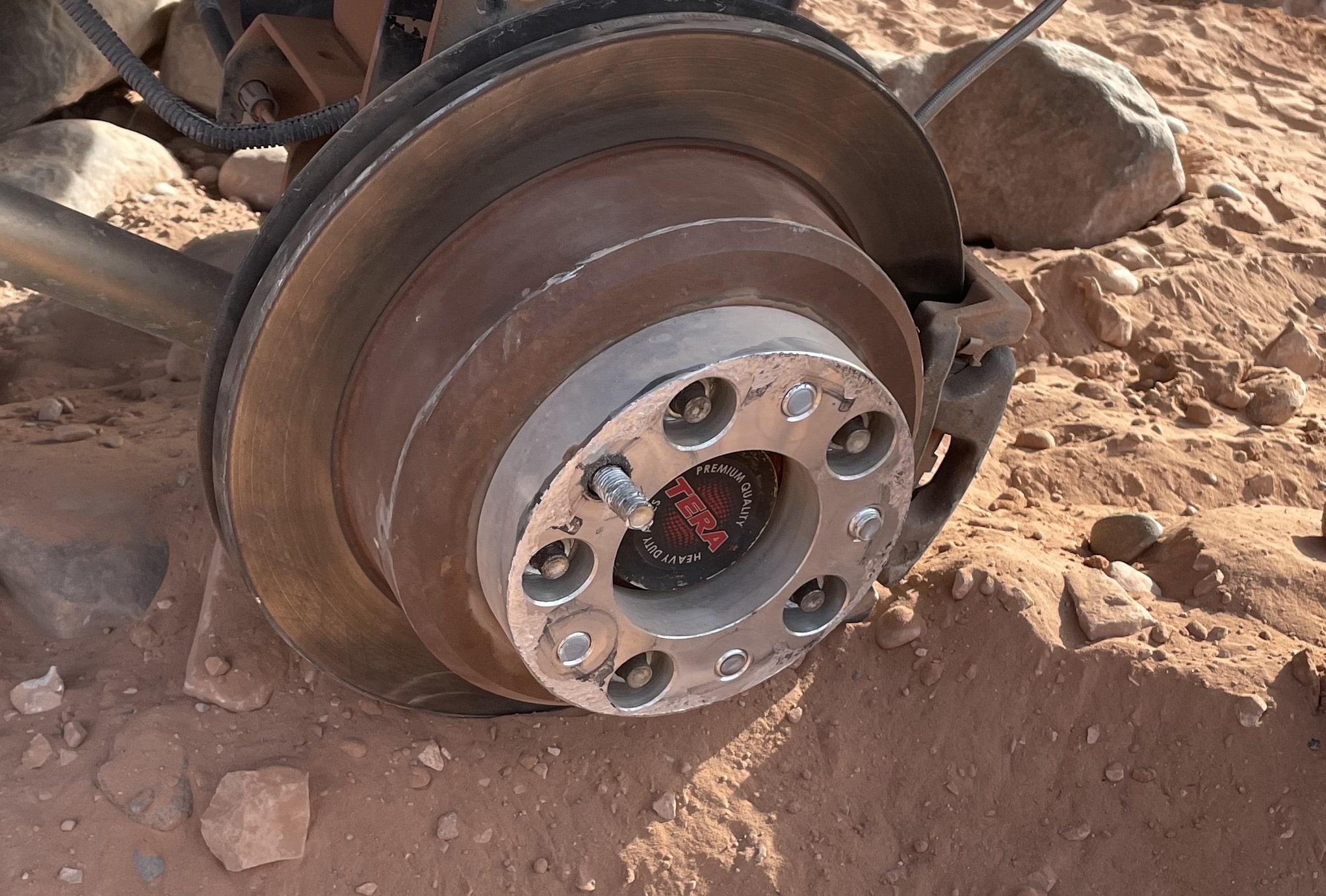 A closer look. Only one partial bolt left. The others were all broken off.

The clicking noise I had heard was broken bolts in the spacer rattling as the wheel was spinning, but when I got out and looked at the start of the trail head, the damage was hidden inside the wheel. Now it was plain as day. The spacer had failed.

The good news was that the axle had plopped down into very soft dirt, and wasn’t damaged. It wouldn’t be the last time on this trip that the Teraflex 60 axle saved my bacon on the trip, but this was definitely money well spent. 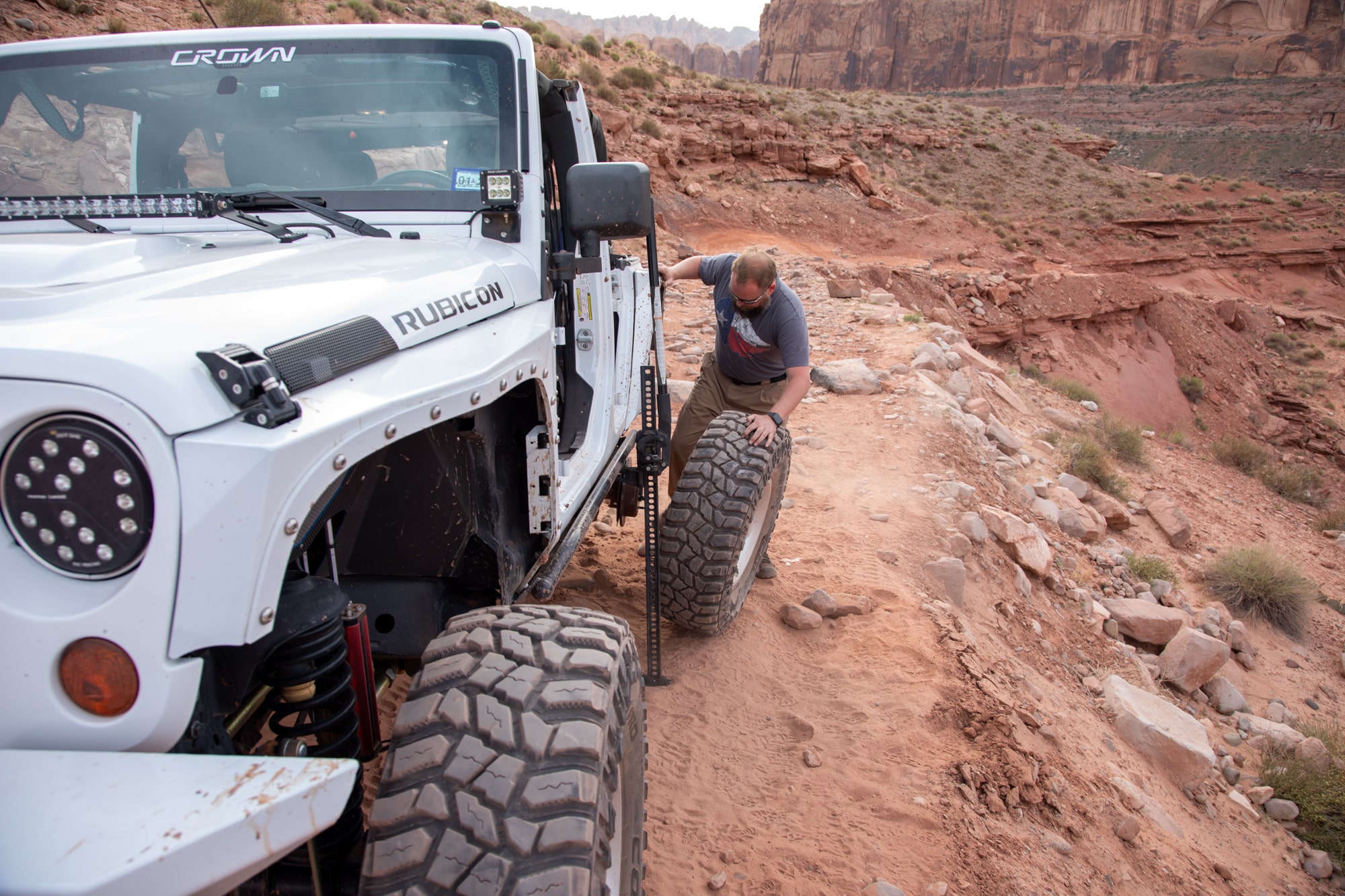 Dave got the tire back on after getting the spacer removed, and then we drove up to a level area with more room. There, we took off the other rear wheel (passenger side), where that spacer had broken as well.

Passenger side spacer. While the bolts are (mostly) there, they were very weak.

All in all, there were many fortunate elements that I was grateful for. First and foremost, Dave is a God among men. He had the tools, knowledge, and temperament to handle this calamity with aplomb (and it wouldn’t be the last this week).

Second, Ghost had plopped down in the soft sand. A few feet forward or backwards, and it could have crashed down on a boulder instead.

Third, we were fortunate that there was no traffic coming up the trail behind us that would have been forced to wait until we got Ghost back up and running.

Finally, all things considered, the repair went smoothly. The tire didn’t roll down the hill; it merely plopped down behind the Jeep. As I said, there was only about a foot to two feet of cliff left before a pretty severe drop-off. The HiLift was incredibly unstable and scary, and I had scary visions of it tipping over towards the cliff face and sending everything down over the side. This wasn’t an idle vision, either: Ghost was swaying back and forth as Dave placed the tire back on the axle. Once the first bolt was reinstalled, I felt much happier and relieved. 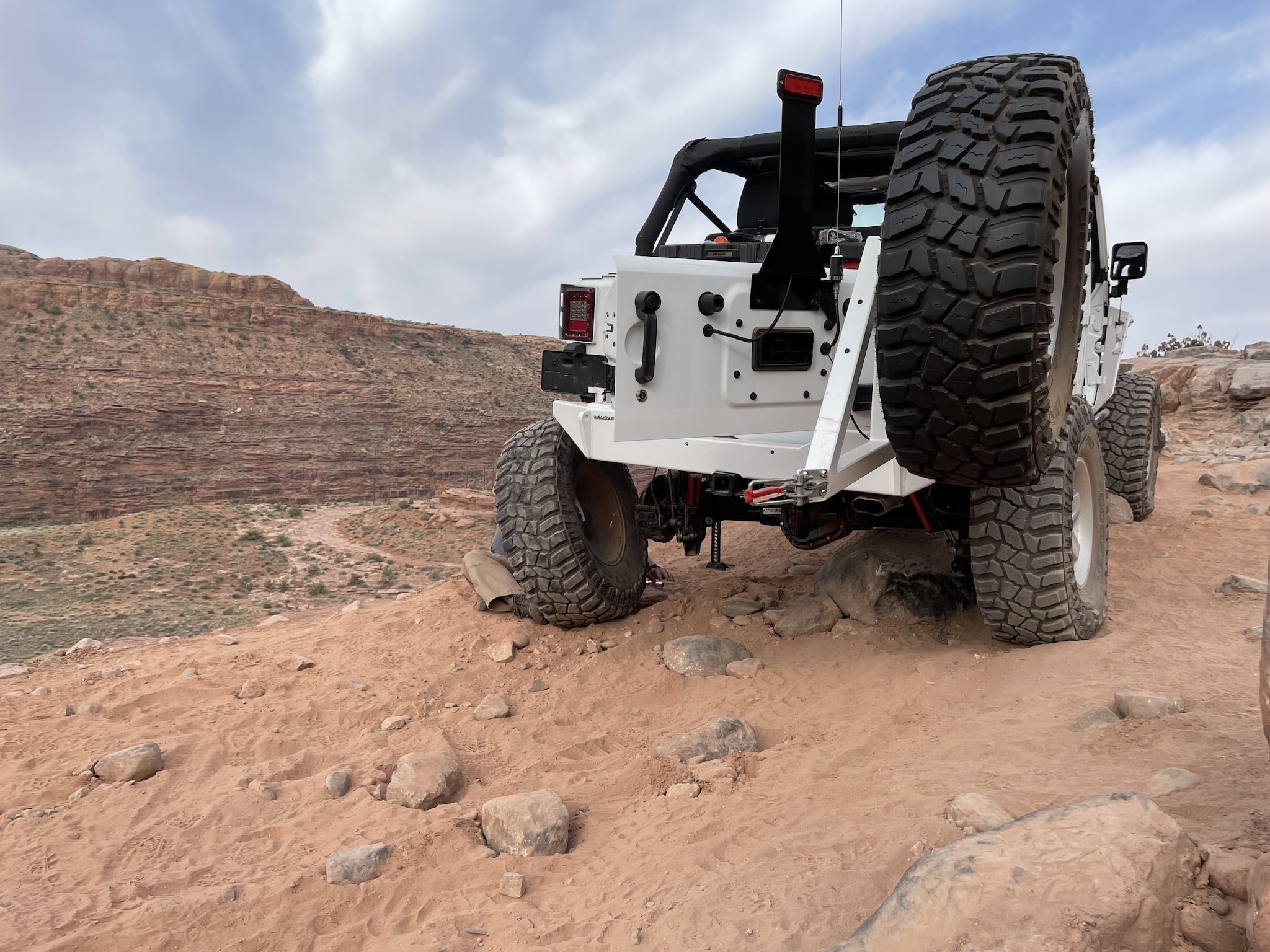 You can almost see Ghost swaying back and forth.

It wasn't clear at first why the previous owner had put spacers on the Jeep. Perhaps it was to give it a more aggressive stance. Perhaps it was because the AEV wheels didn't have a good enough offset or backspacing to avoid rubbing against the frame or the fenders. Whatever the reason, they were a weakness for reliability.

At the time, though, I was concerned, but once I started driving again I realized that Ghost was responding much better. Removing the spacers had made him more stable, more responsive, and a lot more fun to drive. If it had been any other way, I would have probably retreated back to the condo where we were staying.

Little did I know that my stress level wasn’t going to be lowered any time soon. Later in the day, I found myself in a much more dire, much more panicky situation – one that I honestly didn’t know if either I or Ghost would be able to return from. 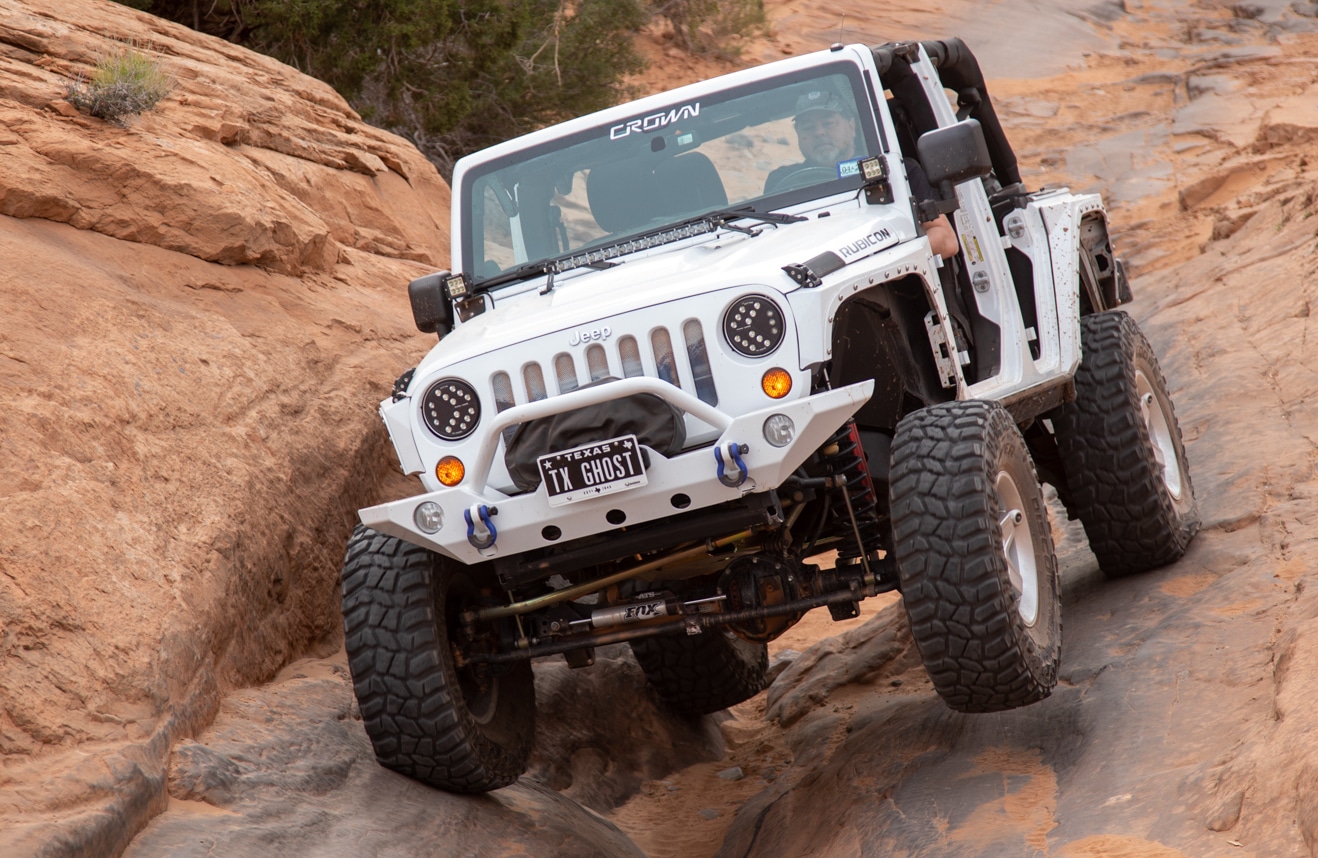 Climbing a notch after the fix, but before things went to hell.