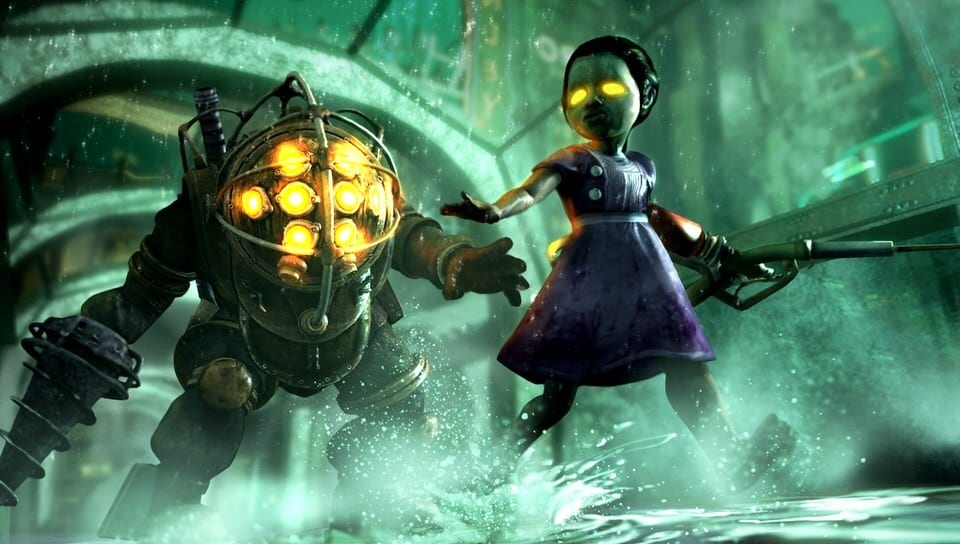 Today is the release date of the Bioshock Collection, a remastered version of Bioshock, Bioshock 2, Bioshock Infinite, and the corresponding single-player DLC versions – in one set. If you have never played Bioshock (and you should!), this is definitely the version to get – especially if you have a new generation console (XBox One, PS4).

Bioshock is, without any question, my favorite game of all time. The DLC standalone game of “Minerva’s Den” builds upon this foundation masterfully and, if I could figure out a way to rank it properly, comes in very high as well. It’s mastercraft storytelling at its best, done by the Grand Master himself – Ken Levine (as I said before, I will probably buy anything and everything created by him and Amy Hennig).

But if you’ve played the game before – much less all of the games before – is it actually something worth getting? I’m not so sure.

Building upon the legacy of the System Shock series, Bioshock was released in 2007. At the time – and, arguably, even now – there had been nothing ever seen like this. Even though the teaser trailer was, effectively, a cutscene, the graphics in-game were equally as astounding (warning: graphic content):

To this day I’ve never seen a game so immersive. The environment itself is a major cast member, impossible to imagine the story taking place anywhere else other than Rapture. About a year ago I “returned” to Rapture, playing the original Bioshock game on my XBox 360, simply because it is beautiful to behold. The music is outstanding, the pacing of the story is perfect, and those glorious HD graphics – especially on a 70″ HD screen – can really invite you into the world of Rapture.

In the past few years, there have been several attempts to “re-imagine” Bioshock if it were on modern hardware systems and modern rendering programs. If you saw the teaser trailer above, you saw how violent the game could be, and how scary the monsters can be. Now, in comparison, take a look at what it might look like if the same Bioshock assets were rendered with Unreal Engine 4 (done by YouTube user noodlespagoodle):

By simply rendering in a modern engine, the same assets emerge as so lifelike you can practically touch them:

What does this look like in motion? Smooth as silk, apparently:

These graphics were created in 2014 – just after the release of the XBox One and PS4 machines, that could actually take advantage of the advanced processing power that Unreal Engine 4 draws upon.

Fast forward 2 years, to the release of the Bioshock Collection.  There are a couple of games sites that have run comparison videos on the original versus the remastered. This one comes from GameSpot:

Obviously 2K (the developers of Bioshock) were going for a subtle approach to the remastering. They’ve obviously spent a great deal of time revisiting the original Bioshock assets (you can see that there are more and better-rendered textures, the back of the airline seat now has a tray table with latch, etc.). There is no question that the environment is crisper, cleaner, and smother.

Remastering is hard, and they’ve obviously done a good job.

Bioshock is known for its seamless integration of style, horror, and storytelling. It’s more than just a FPS and far, far more than just a gore-fest. But the horror element is still there, and still a key component to the game.

If you took the time to look at the first video by noodlespadoodle above, at around the :40 second mark, you see a splicer sitting in a chair. Can you imagine if, as the camera passed over him, he started to move and launch himself at you? Or if the Big Daddy were to suddenly turn and look at you, the green lights flashing an ominous red, as that drill begins to spin up in your direction?

Now, imagine that you know that these creatures are lurking around somewhere. You’re not sure where they are, or when they’re going to attack, but you have to keep your wits about you.

In the original Bioshock, this is stressful enough. Irrational Games (the original developers of the game) created a master class in lighting and environment to push the story. Take a brief look at this walkthrough by user PitchingAce88. It’s a 12 minute video, but you only really need to see the first minute or so:

Now, imagine instead that you’re in the same exact place with a better rendering engine (Source: Youtube User Ross Littlejohn] (there’s a bit of a preamble, but you can skip to the :45 second mark to see the Medical Pavillion re-rendered)

In my mind, wandering around a rapture like this would truly be a harrowing experience.

Part of the problem is that the 2007 version of Bioshock was so good there really isn’t much room for improvement – if all you’re doing is upping the frame rate and resolution. Even when watching the comparison video from Gamespot, I occasionally hard a very hard time understanding which was the original and which was the remastered version (obviously unless the label was on-screen). For some people, this minimalist approach is fine (at least, YouTube user LoneVaultWanderer things so!):

For me, though, I don’t know that I’m quite so forgiving here. At the risk of coming off harsh, we know that 2k spent a lot of time and effort “upping the dosage” when it comes to resolution. I certainly don’t want to disparage the work that they’ve put into the re-done Bioshock. I can’t help but think, however, that this is little more than simply a new skin (probably, well, because it is) and not really a ‘remastering,” as I consider it could/should be.

Obviously, we do not want to change the game. We don’t want to alter the gameplay, or the story, or even a single line of dialogue. To do that would be anathema.

I don’t see, however, how we can’t make it more intense, though. We see these examples outlined above about how the main character of the game – Rapture itself – can be remastered into something more than a fantasy world where we escape to. With the proper re-imagining (and proper rendering engine), Rapture could be an environment that you desperately wish to escape from. You could remaster the game with these upgraded visuals and drastically change the gameplay experience – without changing any other element.

As I said before, if you’ve never played Bioshock – and you like playing games – the Collection is the one to get. At launch it’s selling for $60 (give or take) and you get a lot of content for that price. Plus, the quality of the games are so good that you are getting much, much more for your money that many new releases at that price point.

If you, like me, are a seasoned Bioshock player (I have 100% completion on the first Bioshock), it’s not as clear whether this deal is as much of a value. I have, for instance, all the single-player DLC, and I have all three games, and as you can see from the images above that while the remastered version is cleaner, the original is truly beautiful. In fact, the transfer to a YouTube format really doesn’t do the games any justice when played in person. Perhaps that’s true for the remastered version as well, but as we’re just talking about the relative improvements, I don’t see it.

Score (if you’ve played before, because the content is the same): 6/10