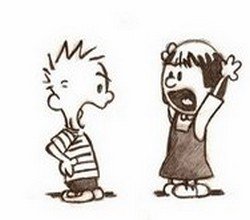 In my “Understanding Metacommunication” piece, I tried to give examples. Recently, though, I came across one of the best examples of the communication/metacommunication mismatch I’ve ever seen. You don’t have to watch the whole thing, just the first minute or so will give you crystal clear, observable examples.

Note, this is a communication analysis, not a political analysis. [Update: original video was removed]

This video has all three in spades, which also means it gives an example of how quickly and easily people float between them naturally (without realizing they’re doing it).

So, let’s give some broad-stroke perspectives of what’s going on in the video:

If you watch the first couple of minutes of the video, you will see a constant leapfrogging back and forth. The PM refuses to state anything other than a metacommunicative stance. That is, he manages to avoid engaging in the communicative aspect by deliberately discussing that it is important to meet with the Ethics Commissioner. This is a metacommunicative tactic that also permits him to talk about other things that are important.

If you watch through the entire video, you will be able to see this repeatedly. Some members of the House attempt to try new “communication zone” topics, but the PM never deviates from his metacommunicative delivery. In fact, if you are a student of Justin Trudeau’s political career, you will recognize that he has managed to entrench himself entirely in a metacommunicative approach (most politicians do, to be fair) in his public communication style.

Hopefully this becomes a bit easier to see how, by recognizing the fluidity of communication between these metacommunication zones, interpersonal and group communication can become more difficult and emotions can run extremely high. Worse, in situations like this we are talking about public policy and lawmaking, so any misunderstanding – intentional and/or accidental – can often lead to bad laws (gee, go figure).

More importantly, however, by being able to recognize how metacommunication works, you can more easily understand how you are manipulated during conversations. Knowing “where you are” in the conversation can be a very, very powerful tool for self-protection.