Photo by David Spiers on Unsplash

The thing about dreams is that there’s no way to tell what they’re like for anyone else. Trying to explain what happens in your dreams seems nearly impossible, as words don’t often seem to capture the sense of scope or scale.

My dreams are vivid. The colors are vibrant, the details are crisp. Emotions are raw and unfiltered – love, hate, anger, lust, joy, fear are all raw and unfiltered. Most of the time this is offset by an awareness that I’m actually in a dream, so I generally find it easy to dismiss whatever I’m feeling as a result.

Last night I had one such dream. It’s unlike anything else I’d ever experienced – so much so that when I told my wife she said I had to write it down. There’s no moral to this dream, at least not one of which I can easily deduce, so there’s no real point to it either. But it certainly has stuck with me and made me think.

I was in a living room that was not my own, trying to converse with a customer service representative who was calmly helping me troubleshoot a misbehaving website. His voice was a deep sonorous baritone, patient and friendly. “Darrin” and I were starting to make some progress, and there were only a few steps left to go.

Darrin’s voice came through the speakerphone, lying beside me as I needed both hands to type. It was as if the phone was attached to a home theatre system, as it was clear and perfectly audible, rather than the tinny phone speakers we have all grown accustomed to. It was just a little louder than having him in the same room, but not so obnoxious a volume that it was a problem.

My father walked into the room and picked up one of the pages of data that I had been trying to enter into the website, and wanted to help. He began reading off the data in answer to some of Darrin’s questions but he was premature.

“Dad, you can’t just start reading off data like that,” I chided him. “We’re not at that point yet.”

In less than a heartbeat Darrin’s voice went from calm and collected to a shrill, panicked shriek.

There was such insistence in Darrin’s voice that I felt the terror in my own chest. Background noise filled the room as his chair scraped back and he lept to his feet. Footsteps pounded across a floor, and I hear the subtle shift of pressure and tension as he raced up a short flight of stairs, all the while calling after his mother.

I looked at my father, who was just as alarmed as I was. He stood up, ready to offer assistance – but there was nowhere to go. I was glad that he was there – he’s a doctor, after all – but we needed to get his attention.

“Darrin!” I called. “Do you want me to call for help. Darrin! Darrin!”

He couldn’t hear me. He must have hit a button somewhere on his end thinking he was muting himself, but instead had wound up muting me.

I could hear everything.

His voice was trembling. He was losing all composure. There were sounds of things being moved out of the way. Just seconds before, his voice had been rich and comforting. Now he was breaking. His heart was breaking.

I had no way of knowing what was going on. I strained to hear anything, something that would give me a clue as to what was going on. I didn’t want to hang up the phone because if he did realize that I was still there, maybe he could ask for help. As a result, all I could do was listen in horror, impotent and traumatized.

Rustling. Movement. And of course, Darrin’s cries. They were incessant. His ability to communicate was gone. He couldn’t find any other words. He was all alone and unable to cope with what was going on right in front of him.

He didn’t know we were there. He was too preoccupied. I held on to the hope that he would give us some clue as to where he was, how I could send help.

I tried again. "Darrin!" My own voice felt just as pleading as his. I tried to will him to remember that I was still on the line, could still help.

There was nothing. Just the sounds of his pleading to his mother and the constant refrain of “No, no, no, no…”

I’d never experienced such a complete immersion into something like that before. As I said, it was raw and pure in its form. It wasn’t tempered with nuance or intellect, there was no logic to it. It was just overwhelming grief and heartache, translated into sound that assailed me from every direction.

I was practically catatonic, unable to do anything except rock back and forth (this is, by the way, not something that I’ve ever done – this was an unexpected and unpleasant development). My father went over to the phone, which had magically turned into an old touch-tone phone. 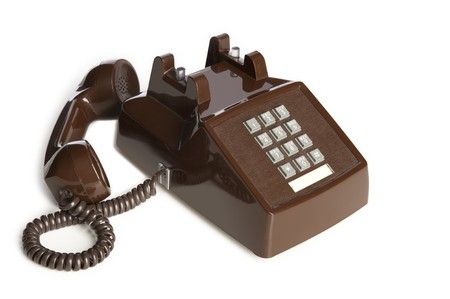 He tapped the hook switch (the buttons on the top) in order to get to an operator at the phone company and try to get them to trace the call.

As soon as he hit the hook switch, though, I woke up.

It was 3:30a.m., nearly. My breathing was hard and ragged. I was exhausted and felt like I had just run a marathon. Now, hours later, I can still hear his voice echoing in my head – this imaginary customer service rep who had gone through unimaginable hell. I can still feel his agony, and still feel my inexplicable shame for my impotence.