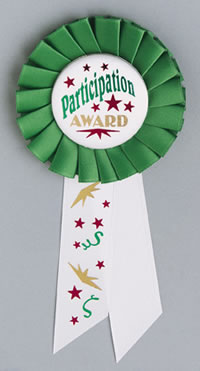 I can’t even begin to express how much this troubles me. I saw this infographic last week and tried my best to put it out of my head, just one of the many emotional gut-grabbing ideas about “believe in yourself” stuff that gets a zillion ‘likes’ and ultimately winds up doing far more damage than good.

This is the result – and perpetuation – of what happens when you create an entire generation of people who have been told that they have reached the pinnacle of achievement just for showing up.

This is the reason why we have parents pitching to their own children at little league games, where there are no strikeouts.

This is the reason why we no longer have “championships.”

This is the reason why Americans consistently fall in the lowest category for general knowledge amongst our international peers.

This is why cheating is so rampant in schools.

This is why people are so easily offended and have lost any precepts of shame.

This is why too many people do not understand the difference between “deserve” and “earn.”

I Am Destroying Myself

The idea and notion that you are not permitted to compare yourself to others as tantamount to self-destruction is, quite frankly, insane. To accept such a premise is to assume that you are already at your peak, already reached the summit of your capabilities, and that nobody – not even you – has the right to challenge you to do better.

The idea that “you are destroying the boy” not only is factually incorrect – no boy was harmed in the making of this blog – but also completely minimizes any sense of achievement that “destroyed” boy may have if he ever applies himself enough to succeed to the top of the class. You do not have to destroy others to become superlative in anything. It is not a requirement.

Moreover, it is unreasonable to expect that any individual can reach superlative performance (whether mental or physical) without effort. What the author of this infographic is suggesting is that not only are we “perfect just as we are,” we actually destroy that perfection merely by attempting to confirm it.

When I Don’t Compare, I Begin To Understand Who I Am

Based on what? How could you possibly begin to understand who you are without any basis for comparison to what you aren’t?

Suppose for the moment that this is not only possible, but the correct thing to do. How do you base any notion of “goodness” on this? What if “who you are” consists of burning puppies or giving poison to the child you are babysitting? What? You didn’t know that wasn’t the way you were supposed to act? Of course, how could you?

Okay, so perhaps I’m going a bit too far out on a limb with a little reductio ad absurdum. Fair enough. But the underlying premise is that as comparison results in gain, achievement and “becoming” (not sure what that means, to be honest), as if those were bad things, and therefore unworthy motivations. It seems to me that many people accept the notion that while perfection may be illusory, there is still a means by which improvement is a valid goal.

Yet, few people like to work towards a goal without knowing some milestones along the way. How am I doing? Have I moved very far? How much farther do I have to go? Am I improving as fast as I could, or is there another means by which I should make an attempt? Perhaps my path lies in a completely opposite direction altogether?

How do you know?

You compare. You compare where you are to where you think you should be. And if you’re not there, then you look around to see if what you are doing is abnormal given the situations. In other words, you need to compare your progress to that of others.

Understanding Myself Goes Beyond Comparison

No, it’s called solipsism, you moron.

Behaving in a way that doesn’t take into account your awareness of others is one of the fastest ways to be left behind in the circle of life. Finishing up with a quote supporting your espoused conclusion does not validate nor justify your methodology. In fact, it simply makes you have to prove that your method actually works better.

Ultimately, this philosophy – if it can be called that – is the foundation for an abject failure to recognize achievement. It embraces a type of scientivism (the notion that if you can’t quantify differences between two elements then both elements must be equal), one that is particularly dangerous.

Just how dangerous? OccupyMovement dangerous. You get a large group of people who believe that there is no need or reason to believe that they are anything other than precious little snowflakes for the mere accident of existence, and that by attempting to improve or better yourself, achieve some level of achievement, you have betrayed yourself and those around you. By claiming “exceptionalism,” as Putin would put it, and by being able to compare yourself to others in order to support the notion, you are a bad person.

In other word, you are a bad person because you are actually good.  You are a good person if you don’t even attempt to try. You have no value if you try to create value; you have absolute value if you never even seek to evaluate yourself at all.

Yeah, I’ll get right on that.

We’ve had a push for “be yourself” for a long time now. The “if it feels good, do it” generation of the 70s had pushed children into accepting that they were great, no matter who they were or for whatever reason. This was an admirable goal – to a point. After all, there was enough institutionalized sexism and racism, coupled with natural bullying about weight and looks, to make any child who was not a fashion model to seriously question what value they have.

The problem was that the encouragement of children’s shows in the 1960s and 1970s, which urged kids to “be whatever they wanted to be” or “achieve whatever they want to, if you put your mind to it,” devolved into “I’m Ok, You’re Ok,” without any real need to justify the basis for either sentiment.

The end result was this poorly-conceived notion that there was no value to working hard, ‘because I’m a good person.’ And as ‘good’ is a state of being that is ‘ok’ or good enough, then there is no reason for me to attempt to improve myself. Anyone who did, therefore, was either denying their true nature or, worse, trying to make you feel inadequate:

What, you think you betta dan me?

Generally, yes! When you give up, when you stop trying to learn, stop trying to improve, you aren’t being ‘good’ any more. In fact, being ‘good’ takes work. It’s not static, it’s not a level platform upon which to stand. “Good” sinks into the quagmire rather quickly, but you won’t know that until you look around and notice that you are, in fact, sinking faster than those around you. That is, you need to keep an ongoing comparison to make sure your sorry ass isn’t left behind.

I’m constantly reminded at times like these of the Pilot episode in the Cosby Show (1984), where Theo just wants to be “regular people.”

The telling part about this clip isn’t even the dialogue, but rather how the audience’s reaction gives us every clue we need to understand the pressure they had been feeling at this time in history. When Theo makes his speech about simply being left alone and loved because of who he is, not who he will become, he stands up and looks off into the distance. The audience hesitantly begins to applaud. Here is the son, only 15, already trying to assert his manhood and make his father who has high expectations realize that they are just too high.

The applause comes slowly, but it does come. When Bill Cosby says, “Theo, that is the stupidest thing I’ve ever heard!” the crowd reacts instantly and with obvious relief. I know that even  I – who was Theo’s age at the time it first aired – cringed when I heard that the original message was going to be paramount. That it was okay for people to give up, and that parents should simply welcome mediocrity with all the love and respect as someone who actually attempted, even if they failed.

This is a systematic social disease, this race to patheticism. We have too many parents who refuse to challenge their children at all, encourage them with platitudes, shower them with disproportionate praise every time a child does a basic or fundamental task. There is no separation between the ordinary, the expected, and the extraordinary.

So, here we have it. The precious little snowflakes have, indeed, learned their lessons well. Their parents, teachers, and peers have succeeded in systematically eradicating the notion that there is value in even attempting to better yourself, that by even asking the question now you fail – and of course failure needs to be avoided at all costs. In fact, if you do actually fail at something, we’ll just change the name of failure so that you won’t feel bad.

The next step here, of course, is that if someone chooses not to compare themselves to anyone then you don’t have the right to do it, because that would make you a bad person. To make such a comparison would lead to irrational peer-pressure not to do it, and include labels such as racist, sexist…

Never mind. We passed that milestone ages ago.

At the end of the day, any individual has the right to check out of being compared to others, and they have every right to convince themselves that they are a better person as a result of living in their own delusional state. The world continues to revolve and evolve, however, and comparisons will be made whether these people want them to be or not.

Just remember that when the next round of OccupyMovement assholes come to town, this is where they get their fundamental philosophy.