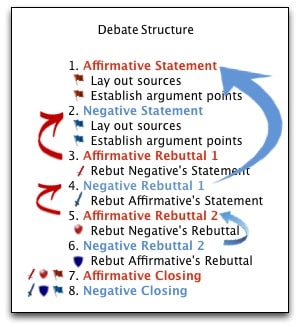 This is the second in a 3-part series on an analysis of the Feminism Debate between Sargon of Akkad and Dr. Kristi Winters on April 30, 2016. This was a formal debate between two prominent YouTube personalities and tackled the highly-emotional topic in a structured and formal fashion.

In the first part, we gave a short overview of the debate process, and how it’s different than most people realize, and how the structure and format can make an enormous difference in the success or failure of either position. In particular, this process played a huge role in the outcome of this debate.

This part will summarize the debate itself, and help you “keep score,” and understand how the debate winner was determined. The final part of this series will provide an analysis of this specific debate, and discuss means (and reasons) by which these should continue, as well as improve.

Summary of the Debate

I’ll summarize the highlights of the debate here to the best of my ability. I want to try to capture the essence of the arguments while not regurgitating the entire debate.

As a quick reminder, here is how the debate structure works in total:

Of the two participants, Dr. Winters took the debate structure most to heart: She defined her term (“feminism”) and began to ascribe it to many positive outcomes in improving the lives of both men and women. She broke down her argument into two main categories – direct and indirect positive effects, and gave examples of each.

Following this, in anticipation of Negative’s counter-points, she attempted to stall such an effort by addressing common refrains against feminism (e.g., it has reached its goals and outlived its usefulness). She addressed these points by illustrating examples of additional work that continues to need to be done both in the US and elsewhere, and summarized by re-iterating the definition of Feminism.

Mapping her arguments to the process of debate, the structure of her approach looked something like this:

Sargon’s opening statement took a radically different approach, both in terms of structure and in terms of expectations.

Instead of presenting a clear “Feminism is not good for the World” outline, he instead decided to tackle the academic discipline of Feminism and specific flaws in the scientific rigor and methodology. Using a “fruit from the poison tree” metaphor, he asserted that subjectively biased research plagues Feminism (as a subset of Social Sciences, which he argued was itself problematic) fails to adequately create an accurate representation of reality. Then, surprisingly, he yielded the rest of his time, only using up just over half of his available allotted time on this single argument.

This approach left Dr. Winters in something of a confused state, and she pointed out (correctly) that Sargon had not addressed the question at hand. She spent a little time addressing the nature of Feminist frameworks in social science (and economics and other disciplines), denying that Feminism was, itself, a “Social Science.” She also challenged Sargon’s dismissal of social science data, associating real-world results built upon that research, like “good marketing.”

Having considerable time to fill not having to spend rebutting, Dr. Winters wisely took the time to re-phrase the examination back to the resolved question, taking the opportunity to re-iterate the need for feminism to address problems in Sargon’s own home country, the UK (e.g., honor killings, female genital mutilation, and a few other issues).

As you can see when broken down like this, by not providing Kristi with material by which she could address, Sargon allowed her to plant more flags on the field – flags that he would have to uproot in order to be able to win the debate.

For his rebuttal, Sargon reiterated his position that the foundation of Feminism is weak because it’s a biased, politically driven social science, before reading another prepared statement. Here, he begins to illustrate that Feminism fails to actually address the problems in the world where actual patriarchal societies oppress women’s rights, preferring instead to redefine the term (“patriarchy”) to exercise control over the people in their immediate environment.

He breaks down three specific terms that are redefined by modern feminists – “patriarchy,” “oppression,” and “sexism” – to create a tautology of ever-present complaints that lead to (among other things) misandry. While he takes the time to establish his position as the Negative, he did not actually rebut any of the points made by Dr. Winters in this rebuttal period.

This was a problem for Sargon as the debate went on. Because this is the rebuttal portion of the debate, there should be a lot more swords than anything else. Unfortunately, there were none, which meant that Dr. Winters’ flags remained on the field, untouched.

Her flags were not permanent, nor untouchable; he could have easily knocked down the points in turn during the rebuttal, but it appeared that he was “pacing” himself with prepared statements for each of the segments of the debate. For example, he could have addressed Affirmative’s assertion of Feminism recognition of preventing honor killings in the UK (especially since he lives in the UK and has a closer proximity to that issue than Dr. Winters and has access to better material, ostensibly), but he did not.

Because of this, when it came to her second rebuttal, Dr. Winters was able to double-down on her position that Sargon’s position was a mere “complaint,” but “he is ignoring the activism that I made in the opening statement.” She criticized his reliance upon “stereotypes and buzzwords, and discounting 150 years of work.” By this point the debate had started to dip into the personal address, rather than sticking with the subject.

Even so, she dismissed or ignored Sargon’s main points of feminist harm and opted instead to re-iterate the policies that Feminism helped end, or is helping to end. She wound up by admonishing Sargon to cite specific names and instances of Feminists who have committed the acts he mentions.

(Note: she had a point. While Sargon did provide sources for his attack on social studies data, he did not provide any sources for some of the bad behavior of Feminists that underscore his main argument).

At this point, Affirmative’s flags are all over the place, and they haven’t been attacked once. Negative has two remaining opportunities to speak, and one of those is supposed to be dedicated to re-iterating existing evidence – no new evidence is allowed in a closing argument, because there is no more opportunity for the opposing side to rebut. At this point, Sargon has 5 minutes to shove an entire debate’s worth of argumentation into one segment.

Sargon’s rebuttal began with addressing Dr. Winters personally, but then moved into another, additional prepared statement. He furthered his conceptual argument regarding the mismatch between Feminist perception of oppression due to minority status when compared to actual minority women in the world in “deeply oppressive societies.” He named Saudi Arabia, Bahrain, and UAE as specific examples, citing population statistics.

He concluded his rebuttal time with the issues and concerns that “Intersectional Feminism” brings to the table, with an ever-expanding catalogue of oppression and logical inconsistencies of an inherent tautology: “Literally everyone and everything is problematic.”

At this point, Sargon had exhausted his opportunities to address Affirmative’s claims, and as a result each of her points in the debate went unchallenged. Whether right, wrong, or somewhere in between, letting them stand without challenge was a devastating mistake.

Dr. Winters’ closing argument once more dismissed Sargon’s points as arguing from emotion. Here, given his updated evidence, she’s on shakier ground, but she’s sticking to her guns. Yet, she levels a devastating (and accurate) charge at Sargon: “[He] is using buzzwords and not evidence, because he constructs the arguments instead of presents the evidence.”

She concludes with the re-iteration of her points once again that there are still issues and problems that Feminism is addressing and working to resolve. Her final conclusion was that since Sargon did not actually address the question, she should be granted the debate win by acclamation.

Sargon’s closing statement was by far his most emotional. Using Obama’s (false) claims of 1-in-5 rapes on campus and the (false claim of the) 77% pay gap, these are examples of Feminism doing harm. He re-iterated that Feminism was not based on reliable, empirical data, but is riddled with political bias.

He claimed that he could give a list of feminists and evidence – after the debate – to which she can be seen in her window gesturing frantically that he needs to present them now, not afterwards. He concludes with a quote from C.S. Lewis: “Of all the tyrannies, the tyranny sincerely exercised on behalf of its own victims may be the most oppressive.”

I put a shield here, instead of a sword, because at this point the stance was far more defensive than addressing any of Affirmative’s points. It also doesn’t qualify as a flag, because it wasn’t an iteration or establishment of a Negative position in the debate.

The last part of this series will look at the analysis of the debate, and illustrate areas of strengths and weaknesses for both parties.