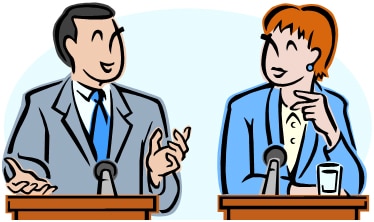 This is an examination of the YouTube debate on the merits of Feminism between feminist Dr. Kristi Winters and anti-feminist Carl Benjamin, a.k.a., Sargon of Akkad, on April 30, 2016 (I had hoped to have this completed in a more timely fashion, but personal circumstances delayed me). Unlike the travesty of “debates” that exist nowadays, this was a genuine effort between the two parties to engage in a formalized process that included proper argumentation, rebuttal, and citation of sources.

As some people may know who’ve read me before, I’ve been absolutely incensed with what’s been happening on university and college campuses now (probably taking things a bit more personally than I should, but then again, probably not). I’ve been mortified about how we are losing the struggle for academic inquiry on many topics, chief among them feminism, and seeing a good-faith effort to engage in this way was a good thing.

This blog is a bit long (no… really, it’s long), so I’ve broken it down into three parts (see Part 2 and Part 3 if you want to skip to either of them). If you’re interested grab a cup of coffee (or tea, or beer keg, or wine cellar) and buckle in. We may be here a while. Or not  (you may not have even gotten this far).

The video above is about an hour and a half long, though the debate itself only lasted around 45 minutes (if you do watch this video, I do recommend watching/listening until the complete end – the Q&A section is what really makes the experience worthwhile).

While I tried to write this blog without having the video as a prerequisite, it should go without saying that the analysis will make a great deal more sense if you have.

What We’re Going To Examine

My analysis is going to discuss the nature of the debate, highlighting the main points of each participant, and then providing some commentary on the particular choices.

I don’t have the tools to break down and edit specific video portions of the debate, which is somewhat disappointing because I think there are some excerpts that can be taken individually without losing the context.

In this part, we’ll take a look at the art of debate itself, because for those who have not engaged in anything other than a pub discussion, the format can be a bit awkward and daunting.

In the second part, I’ll provide a summary of the debate, the arguments made by the participants, and assess the value of the arguments in order to understand why the debate was won the way that it was.

In the third and final part, I’ll break down the analysis of the debate. In that section, I’ll show where the individual argument strategy and tactics – for both sides – succeeded or failed.

I’ll begin with the results spoiler: Carl Benjamin (Sargon of Akkad) lost this debate, soundly and severely. The question is, therefore, how and why this happened given the weaknesses in Kristi Winters’ case.

The Art of Formal Debate

Generally speaking, formal debate is highly structured for a reason. It is a mixture of prepared arguments and impromptu rebuttals, and while it may feel stilted (and long-winded at times), it provides both the participants and the audience a means by which to weigh and evaluate the arguments on both sides.

The idea is that you have two sides to one specific argument, which is phrased in a Yes/No format. In this case, the question was, “Is Feminism Good for the World?” Obviously, the interest of the participants (and their respective fan clubs) is to see how one side of the debate fares against the other when the opportunity for rebuttal arises. Since neither Kristi nor Sargon (I think of him in these terms, and it appears he prefers to be addressed that way anyway, so I’ll continue to use that name) generally have rebuttals for their views in their usual video missives, it’s a nice treat to be able to see how the arguments fare when there are immediate counter-points.

So, to that end debaters start with their own arguments (often in the form of prepared statements), where they lay out the points of their arguments in the time allotted.

For many people this is often the most difficult to listen to, because speakers often speak very fast in order to get through their material in time (as opposed to focusing on comprehension). It tends to be the most dull, too, because this is where you cite your sources, lay out the evidence, and start building up your rhetorical devices for both offense (why your idea is good) and defense (why their idea can’t hurt your idea).

General practice is for the person holding the affirmative view (in this case, Dr. Winters) to go first. While this has the advantage of being able to set the groundwork for the debate, the person holding the negative position gets the last word, thus leaving the lasting impression on the debate. If the person on the negative has done their job right, they will have managed to take the foothold that the Affirmative has established and done some rhetorical jujitsu to make the debate go their way.

After the opening statements are made is when things really get interesting (IMO). There are two rounds of rebuttals, both designed to take a closer examination of the others’ arguments: the first is when the Affirmative gets to tackle the points that the Negative just made, and then the second is when the Negative gets to take apart the Affirmative’s case. Then, there is another round of rebuttals where the participants get to take apart the others’ first rebuttals.

n the graphic to the right, you can see what this looks like, in terms of where the focus should be. The flags represent the position that you’re taking (planting your flag, get it?), the swords represent attacking the other person’s position, and the shields represent defending your position from the other side’s attacks. While you can always continue to attack, defend, or plant your flag on a position, these are the dedicated times for each of these activities, and usually where you find the bulk of the arguments (establishing a position, attacking the other’s position, defending your own position).

The real interesting part of any debate – for me, anyway – is when we get to see the rebuttals. That’s the part of the debate where people are forced to show that 1) they’re listening to the other side and understand their arguments, and 2) have to face direct confrontation and challenges to their stated positions.

As you can see, there is something of a lopsided nature to the debate process. Not only does Affirmative have the opportunity to establish their position first, but Negative has to sit tight and wait until after Affirmative already gets to challenge them on their points of view. This is very, very hard for novice debaters to come to grips with, because the impulse is to defend their positions too soon, thus missing an opportunity to lay out the necessary foundation for their argument.

If that sounds like the poor Negative gets beaten up twice in a row, you’re right. However, the converse is true, too – they get to leave the Affirmative on the defensive twice in a row at the end of the debate, and often leaving a powerful lasting impression is a far greater advantage.

So, there are different strategies that you take when you’re on the Affirmative versus on the Negative. For the Affirmative, you want to hit hard, hit fast, and dominate the conversation from the beginning. For the Negative, you want to take the long game, biding your time and taking note of openings that present themselves along the way. (Sun Tzu’s Art of War has a lot that can be learned in this kind of process).

For that reason, there are three main skill sets that are required in order to be successful.

First, you have to do your research, which in turn has to be top-notch. You can’t simply use any old URL as a source citation (not all sources are created equal). That means your preparation of your own argument must be solid, practiced, and thorough.

Second, you have to be able to have good listening skills. You need to be able to understand what your debate opponent is arguing, so that you can 1) address the points they make and either accept, refute, or reject them, and 2) understand when they may be handing you a rhetorical gift on a silver platter. We’ll talk about this more later on.

Third, you need to be able to properly communicate your ideas. Simply being able to comprehend an argument is not enough. Simply presenting ideas is not enough. It’s tying those ideas to the relevance of the audience that is key. We’ll address this later on as well.

It should be noted that in debate circuits you are expected to be able to argue either side equally proficiently. While the point during this debate was to promote a pre-existing, entrenched position, the lack of experience on both debaters’ parts to understand the others’ position was painfully obvious.

In the next part, I’ll provide a summary of the debate, complete with breakdown of the debate strengths and weaknesses.