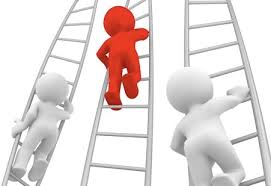 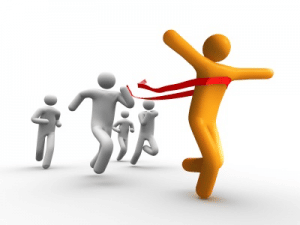 A question came through on Quora, and I decided to give it a go on answering…

Defeat is when you are utterly obliterated in a competition. That is, the opposition has so completely taken you out that you cannot get back up. You are down, permanently. 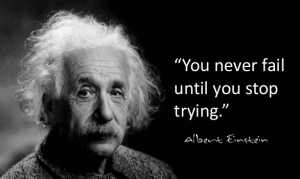 Failure, is when you give it your best attempt, but fall short. There can be any number of reasons for this – all the reasons above, plus a few more (like natural talent, environmental circumstances, cheating, etc.). When you fail, however, you can (and should) get back up, dust yourself off, reflect on what went wrong, and then try again. Failure is a natural part of progress and growth.

Not winning is what happens when you don’t come in first place. But, as I’m sure many people will tell you, there is no shame in coming in second place (or third, or in some cases 1000th in cases where there are 50,000 competitors). Just because you don’t come in first place, doesn’t mean you failed, and it certainly doesn’t mean that you are defeated.

All things being equal, keeping that sense of perspective will also help focus you on what needs to be done for the task at hand.

Points 1 and 2 go hand-in-hand. If you fail, you look back at Point 1 and try to figure out what kind of preparation you need to do. What kind of training regimen (this is especially true for competition of the mind, btw) is necessary? Is this a discipline problem? Is it unrealistic expectations? Only you can answer that question.

Then you test yourself. Are you prepared enough? Have you figured out where your weaknesses are that need to be buttressed? You can’t simply “hope” that someone won’t see those weaknesses and try to exploit them. “Hope” is not a strategy.

Then you set benchmarks for yourself. Milestones. Work towards improvement (if you think that I’m just talking about physical activity, then you misunderstand – this is the process for improving in competition, regardless of the form). The first time you compete, you likely won’t win. Nobody sits in a F1 race car for the first time and expects to win Monaco. No one steps onto a Spelling Bee stage without practicing from the dictionary.

Know your competition. Understand their limitations. Getting that information will help you gain confidence in where you stand when it comes time to lay it on the line. 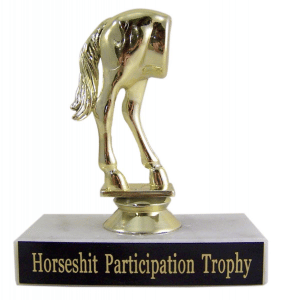 This question reflects a more common attitude than you may think. An entire generation has grown up with participation trophies, a nominal “win” for young people who have no possible sense of scope or scale of what achievement actually means.

There’s a brilliant example in Robert Heinlein’s Starship Troopers (the book, not the movie) that captures this sentiment beautifully:

[Mr. Dubois] had actually come back to my seat and pinned it on my chest. “There! Are you happy? You value it — or don’t you?” Mr. Dubois had looked surprised. “It doesn’t make you happy?”

“Exactly! The prize for first place is worthless to you . . . because you haven’t earned it. But you enjoy a modest satisfaction in placing fourth; you earned it.”

Unfortunately, Heinlein was wrong on the last point. These participation trophies aren’t worthless to those who receive them nowadays. Such a lesson can only be learned by someone who has actually earned something. When you have an entire generation who is given “achievement-by-proxy”, it becomes the only measurement of value – I was there.

There is a value to the “participation trophy generation” of not having their perspective shattered. That is, to know that they aren’t perfect, that who they are is far more important than what they do, they will fight – viciously, it seems – to prevent anyone else from achieving anything. If someone has something that they cannot have (through lack of effort), it’s because they were somehow gifted the achievement through “privilege” or some nefarious, underhanded means.

To them, achievement and awards for the 100m dash were given to certain participants through favoritism and preference, rather than via extraordinary effort. For that reason, why would anyone want to compete, if only to be criticized and labeled for succeeding?

Competition is not just the act of pitting people against each other – that is the mindset that allows people to become “disenfranchised,” to use the vernacular of the argument. Competition is – ultimately – the act of evaluating yourself against your own capabilities. Can you improve your skills, your capabilities, your talents?

Obviously, you can, but how do you know? Competition.

If you place someone who has been handed participation trophies just for showing up, without providing them any context of the meaning behind such “awards” (which is the actual point, of course – simply label someone who has accomplished something, rather than actually requiring them to accomplish it), then suddenly they find themselves unworthy of how to cope when real competition tests their abilities. 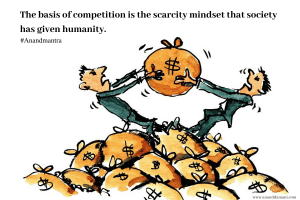 Is it any wonder that someone would fear competition when every lesson they’ve been taught since childhood that “non-competitive” events are morally superior? In fact, they are explicitly taught that competition – especially coming out on top – is a morally bankrupt method and should be avoided at all costs?

You, my friend, have been sold a bill of goods. You have been left unprepared to handle conflict in a healthy way. Because you have been robbed of a systematic approach to ratcheting up your skill sets, you are now faced with the consequences of not only having to compete, but learn how to compete at the same time.

This is of little comfort, I know, but this is precisely the type of outcome we warned educators about when this sort of policy adoption started in the 1990s, and has continued ever since.

You have to learn how to be okay with the fact that competition is not about making you vulnerable or exposing your limitations. Competition is designed to help you recognize where you are and how you can improve. It’s part of a process, not an indictment of what you can or cannot do. What’s more, competition involves evaluating yourself as an individual, for only you can have the power and ability to make a change in your abilities.

You don’t need others’ approval to be competitive.