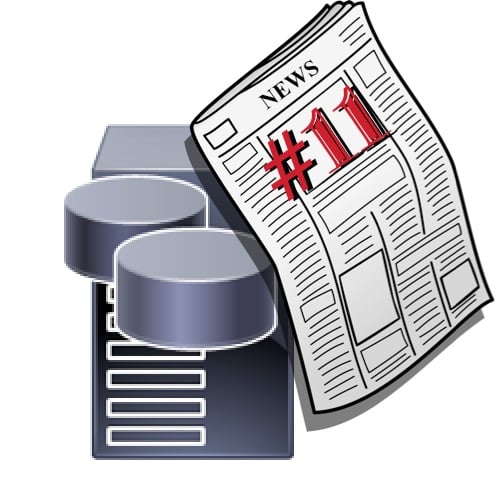 Well, it’s been a while. May and June was absolutely packed with webinars, presentations, and travel, so I’ve been quite remiss in my release schedule. Nevertheless, here’s some storage short take information for you. Bear with me as I’m trying to catch up from the last one, which was 2 months ago, so some of this may not be news.

Don’t forget, if you have information that you want to know more about, don’t forget to leave a comment below.

The U.S. Army has funded research into materials that could lead to interesting data storage techniques.

You are probably going to be hearing more and more about Key-Value storage in the next year or so. If you have the cycles now to introduce yourself to the concept, it’s probably a good idea. See below for some information pertaining to KV from the industry bodies. In the meantime, though, you can read about an example KV store called Crail-KV, which is a native KV-SSD using NVMe-oF (published by IEEE).

Technobezz has published their choices for the best external drives in 2019. Not to be outdone, Techzimo released their Top 14 choices as well. I have to violently disagree on their choice to add in the Western Digital MyBook Desktop External Hard drive, however. I’ve had 4 of these DOA in a row. It’s so bad I’m actually not going to buy any more WD kit for a while.

First and foremost, major congratulations to Elastifile for their announcement of being acquired by Google.  I have always been an enormous fan of Elastifile, and think that the synergy with Google’s Cloud Platform is a no-brainer. This is right on the heels of their announced API for Google Cloud File Service, along with SMB 3.1 support, so the other shoe has just dropped.

Speaking of acquisitions, DDN has completed its acquisition of Nexenta.

WekaIO raised $31.7 million in Series C funding. You may recall that WekaIO is a file-storage software vendor, focusing on parallelism and high-performance. Speaking of which, they recently announced Supermicro as an authorized OEM partner.

On the software side, in May Synology released DSM 6.2.2 with improved system optimization and new resolution features. I haven’t had a chance to play with this yet, but as my DS216+ has been acting up a lot more recently, I think I’m going to have to set aside some time to pay attention to this.

Product Managers, get out your justification slide ware. KBV Research thinks that the Global Next Generation Data Storage Market will reach $106.3 Billion by 2024.

Huawei and CNEX accuse each other of stealing secrets from each other. [Disclosure: I know Ronnie pretty well, and I’m planting a flag on his side on this one, though I have absolutely no dog in this hunt or know anything specific about this case.] Oh wait, this is old news. Late last month, a jury unanimously found Huawei misappropriated CNEX’s trade secrets.

Speaking of Huawei, they’ve announced their Cloud storage strategy: called All-Flash. They say it will “help expand the Chinese high-tech company’s cloud storage portfolio for enterprise.” Up next, Captain Obvious tells us that water is wet.

And, speaking of CNEX, Mellanox Capital has made additional investments in bout CNEX and Pliops. Pliops is a developer of KV storage (remember KV?). There is a lot of Synergy between the three companies from a technological perspective (Pliops has the storage technology, CNEX has the controller technology, and Mellanox has the transport technology). We’re talking a true killer combination if the stars align there. Note this is an investment, not an acquisition, though.

Kaminario has announced a couple of new Storage-As-A-Service (STaaS) licensing schemes to augment it’s procurement model. Effectively, they’re taking a “cloud first” adoption model and then attempting to establish permanence in customer data centers. It’s an interesting strategy, to be sure.

IDC has named Lightbits Labs, Excelero, and Pavilion Data as top innovators of storage for NVMe/TCP solutions. I would not argue with that conclusion.

A German company named Starline has announced a Ceph, iSCSI, and NVMe scale-out SAN solution, called PetaSAN.  Honestly, I can’t think of a more convoluted combination of protocols in a storage appliance. I’ve not done a proper technology evaluation, though, so I can’t make any claims to its efficacy at all. Let’s just say that I’m hyper-skeptical.

Scale Computing has announced a collaboration with Parallels, in an effort to simplify VDI. However, technical details appear to be difficult to come by for right now.

HPE made several announcements at Discover in late June. Rather than itemize them all, you can read about it here and here. TL; DR, announcing Primera (a new server/storage platform), enhancements to Simplicity, and a new Nimble dHCI storage platform. You can also check out Calvin Zito’s recap.

NVMe over Fabrics startup Pavilion Data Systems announced that they are part of the IBM Global Solutions Directory. Good for them. They’ve been playing the “slow and steady wins the race” game in the NVMe-oF space, and it looks like it’s paying off for them. Cool.

Last but not least, Broadcom is in “advanced” talks to acquire Symantec for more than $15B. Now isn’t that interesting.

SNIA has been busy working on technical specification and recently announced two:

In case you missed it, SNIA also released a technical White Paper: NVM PM (Persistent Memory) Remote Access for High Availability. Useful if you want to learn more about the design characteristics of using high-speed networks as a transport for persistent memory.

NVMe has ratified version 1.4 of the base specification. A lot of this will be discussed in great detail at this year’s Flash Memory Summit, but for now you can get a quick-and-dirty glance at the changes in the 1.4 revision.

Fibre Chanel Zoning Basics. The FCIA has been doing a lot of advanced topics lately, so we went back to basics with Fibre Channel Zoning in the June 27th BrighTalk webinar. Just because it’s the fundamentals, though, don’t confuse this with being just for beginners. We also discussed some of the latest advancements in zoning and things you can look out for in the future to make your life easier when administering FC storage.

The SNIA Cloud Storage Initiative is hosting a live webcast next week on July 17th, “Kubernetes in the Cloud (Part 2)”.  If you guessed from the title that there was a “Part 1!” You’re right and you can view that on-demand now. It covered the high level aspects of Kubernetes and will get you up to speed for the July 17thpresentation.

SNIA has also announced the Storage Developer Conference (SDC) 2019 presenters. Now, in theory, I’m supposed to be presenting on NVMe standards, but I don’t see my picture up there. So… hmmmm.

NVM Express is back at the Flash Memory Summit as an organizational sponsor and host. There are two full days of NVMe goodness to explore – from understanding what’s new all the way to discussions of use cases.

Flash Memory Summit is coming up soon, and I’ll be moderating a couple of panels, and participating in another one on the Future of NVMe and NVMe-oF Storage Industry Trends.

Apparently Gmail API changes have affected Synology’s DSM integration. If you use DSM to send notifications via Gmail, you’ll have to update to DSM 6.2.2-24922 Update 2.

Solution: None yet. Watch this space or Synology’s direct security announcements.

These vulnerabilities allow remote attackers to obtain sensitive information or modify system settings via a susceptible version of Photo Station.

Anyone who has been using Zoom on a Mac needs to take a closer look at just what information is being used and sent out. TL, DR: Zoom installs a web server on your mac that bypasses security settings. The Register has an excellent breakdown.

Special Thanks to Diane Marsili and Sophia Meyer for contributions to this article.